Four of a family murdered in Tangail for Tk 200 only 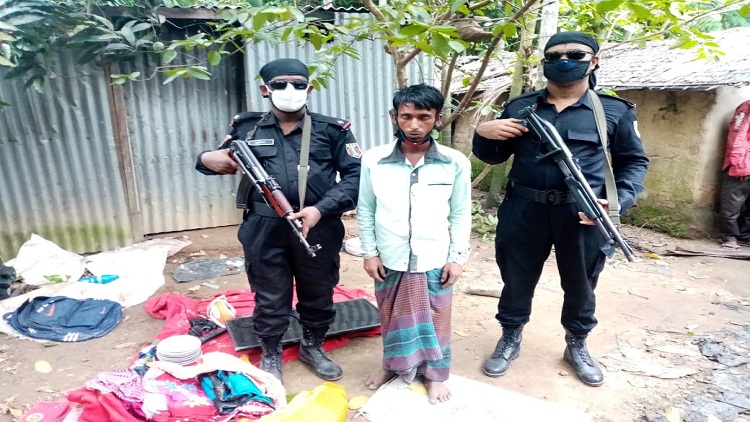 Online Desk : Principal accused in murder of four members of a family at Madhupur upazila in Tangail district has been arrested by Rapid Action Battalion (RAB)-12.

The deceased Abdul Gani was a money-lender who used to offer loans on interest. The accused Sagar Ali had money-lending business with Abdul Gani. The accused failed to repay his loans several times. On Tuesday, Sagar Ali went to Abdul Gani to lend Tk 200. But, Abdul Gani refused him to lend the money and drove him away without paying any amount.

Major Abu Nayeem Mohammad Talat said the accused Sagar Ali felt humiliated at the behaviour of Abdul Gani. Then he hatched a plan with an accomplice to kill Abdul Gani and loot his money.

According to the plan, Sagar along with his accomplice went to Abdul Gani’s house at about 10:00pm on Wednesday. His accomplice took drugs to make Abdul Gani unconscious from a local bazaar. As the accused were known to Abdul Gani, they were allowed to enter his house.

“After the killing, the killers took away the valuables with them and fled away locking the house from outside,” he said.

According to the confession of the killer, RAB-12 members later seized sharp knives and looted goods from the house of his sister at Brahmanbari. RAB has also launched a manhunt to arrest the accomplice of Sagar Ali.