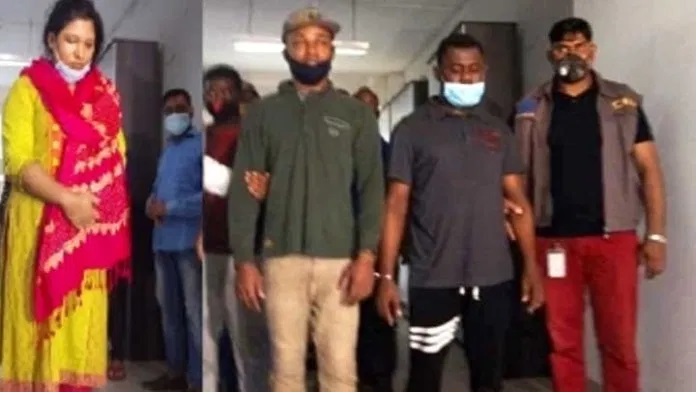 Online Desk : A group of fraudsters have embezzled several crores of taka over the last few months in the name of offering expensive gifts after developing relation on Facebook.
Receiving the allegation, the Criminal Investigation Department (CID) of police has arrested one Bangladeshi woman and 12 Nigerian citizens from Pallabi area in Dhaka.

The fraudsters exploited Facebook to cheat people in the name of offering gifts while the Bangladeshi woman used to swindle money from the victims posing as a customs officer, said Dhaka Metro Additional DIG Sheikh Md Rezaul Haider at a press briefing at the CID Headquarters early Wednesday afternoon.

CID Additional DIG Sheikh Md Rezaul Haider said that the accused swindled Tk 5 to 6 crore from more than 100 victims across the country in the past two months.

The ring members become Facebook friends and offer expensive gifts from a fake messenger ID named Katherine Cullen Sophia. The victims then get an airline booking document with a list of expensive gift items. They are finally instructed to collect the gift boxes containing ‘goods worth million dollars’ from the Chittagong Airport Customs, Rezaul Haider said.

“Farzana, in the guise of a customs commissioner, pressurised victims to accept the so-called gifts against a deposit of Tk 4,25,000 in several bank accounts. She also intimidated the victims saying that there would be legal complications if they did not receive the gifts,” he said.

The CID has found that the scammers befriend people of the opposite sex on Facebook and cheat them.

A victim, who filed a complaint with the law enforcing agency, was forced to deposit Tk 3,73,000 in various bank accounts provided by Farzana.