Trump concedes pandemic to ‘get worse before it gets better’ 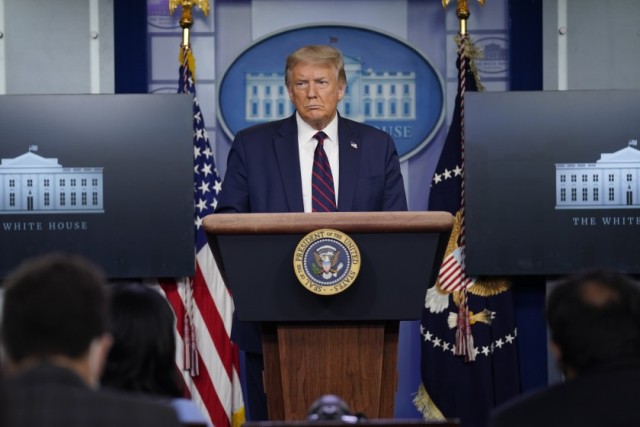 Online desk : President Donald Trump has warned the US pandemic may “get worse before it gets better”, as he revived his virus briefings with a more scripted tone.
Mr Trump also asked all Americans to wear face coverings, saying “they’ll have an effect” and show “patriotism”.

The president, who was not wearing a mask at the briefing, has previously disparaged them as unsanitary. His aides have reportedly pressed him to adopt a more measured approach as virus caseloads spike across the US.

The daily White House news conferences ended soon after Mr Trump suggested in April during freewheeling remarks from the podium that the virus might be treated by injecting disinfectant into people.

In his first White House coronavirus briefing for months on Tuesday, a less off-the-cuff president echoed what public health officials on his pandemic task force have been saying as he warned: “It will probably unfortunately get worse before it gets better.

“Something I don’t like saying about things, but that’s the way it is.”

He added: “We’re asking everybody that when you are not able to socially distance, wear a mask, get a mask.

“Whether you like the mask or not, they have an impact, they’ll have an effect and we need everything we can get.”

Mr Trump – who more than once referred to Covid-19 as the “China virus” – took a mask from his pocket in the briefing room, but did not put it on.

The president is facing an uphill climb to re-election in November against Democratic challenger, Joe Biden, according to opinion polls.

Mr Biden on Tuesday accused Mr Trump of having failed Americans in his handling of the pandemic. “He’s quit on you, he’s quit on this country,” the former US vice-president said.

Mr Trump appeared without the medical experts who used to address the briefings. He kept his remarks brief and focused, avoiding sparring with reporters who asked a few questions.

He continued: “We’re asking Americans to use masks, socially distance and employ vigorous hygiene – wash your hands every chance you get, while sheltering high risk populations.

“We are imploring young Americans to avoid packed bars and other crowded indoor gatherings. Be safe and be smart.”

Mr Trump has been reluctant to wear a mask himself in front of the media, claiming that some people only wore such face coverings as a political statement against him. The press pictured him recently wearing a mask for the first time as he visited a military hospital.

When asked on Tuesday about his shifting support for masks, the president pointed out that even health experts had changed their minds.

Back in March, both Dr Anthony Fauci, one of the leading members of the president’s coronavirus task force, and US Surgeon General Jerome Adams said there was no reason people in the US should wear a mask.

Since at least April, the US Centers for Disease Control has recommended Americans wear face coverings in public.

Dr Fauci now argues US authorities should be more “forceful” in compelling mask wearing, though Mr Trump has rejected calls for the White House to issue a national order on the issue.

During the briefing, the president continued to assert the virus would one day “disappear”.

He also wrongly claimed the US has a lower coronavirus death rate than “almost everywhere else in the world”.

According to Johns Hopkins University, the US mortality rate is ranked 10th out of the 20 worst-hit countries.

The United States has recorded nearly 3.9 million Covid-19 cases and over 141,000 deaths – the highest by volume in the world.

Mr Trump was also asked by a reporter about the case of Ghislaine Maxwell, the British socialite who was charged this month by US authorities with sex-trafficking children for her ex-boyfriend, the late convicted sex offender Jeffrey Epstein.

The president said: “I haven’t really been following it too much. I just wish her well, frankly. I’ve met her numerous times over the years, especially since I lived in Palm Beach [Florida], and I guess they lived in Palm Beach.”

“I don’t know the situation with Prince Andrew,” added Mr Trump, mentioning the British royal who denies claims he had sex with a teenage girl who says she was trafficked by Epstein.