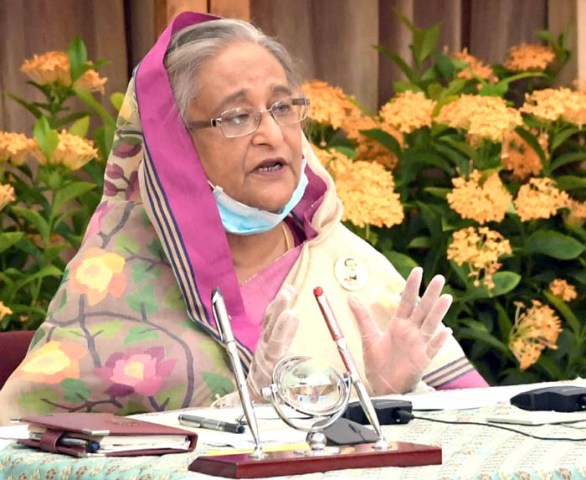 Online Desk : Prime Minister Sheikh Hasina on Sunday accused again the anti-liberation forces of assassinating Bangabandhu in 1975, saying that the people of Bangladesh had lost “all potentials” after this brutal killing.
“Father of the Nation Bangabandhu Sheikh Mujibur Rahman presented independence to us. But those who don’t want this independence and also don’t believe in it and those who didn’t extend support to independence from inside and outside of the country brutally killed him through conspiracies,” she said.

Sheikh Hasina, also the Awami League (AL) president and elder daughter of the Father of the Nation, said she and her younger sister survived the August 15 carnage as they were abroad at that time.

“But the people of the country had lost all potentials after this assassination,” she said, adding Bangabandhu was killed at that time when the nation was progressing fast towards socio-economic development under his dynamic leadership after independence.

The prime minister said this while inaugurating a voluntary blood donation programme arranged by the BKL, the peasants’ wing of the AL, in the city this morning. She opened and addressed the programme through mobile phone, BSS reports.

BKL arranged the voluntary blood donation programme and discussion in front of Bangabandhu Memorial Museum at Dhanmondi-32 as part of the month-long programme of Bangladesh Awami League and its associate organizations marking the 45th National Mourning Day commemorating the martyrdom of Father of the Nation Bangabandhu Sheikh Mujibur Rahman 45 years ago.

The premier asked the BKL leaders and workers to continue work to implement Bangabandhu’s ideology by building a hunger-and-poverty-free prosperous and developed Bangladesh.

She said Bangabandhu sacrificed his life by shedding blood for ensuring the welfare of the Bangalees and building a hunger-and-poverty-free Sonar Bangla.

“The dream of the Father of the Nation will be materialised if we can establish Bangladesh as a hunger-and-poverty-free developed and prosperous country,” the premier said.

Pointing out that her government is keeping up its efforts to implement Bangabandhu’s ideology since assuming office in 2009, Sheikh Hasina said the aim of her government is to present a beautiful life to the people by ensuring their basic needs.

“We’re continuing our endeavours so that the people get food, education, healthcare services as well as a place for living,” she said.

The prime minister said the Awami League formed government in 1996 after 21 years, but a dark era prevailed in the country from 2001-2008.

“But we came to power again by taking a huge mandate of the people in 2009, and since then we’re working tirelessly for changing the fate of all sections of the people including farmers and workers,” she said.

Sheikh Hasina said massive programmes were taken to celebrate ‘Mujib Borsho’, marking the birth centenary of the Father of the Nation.

“But unfortunately at this time the coronavirus pandemic hit worldwide, and the economy of the entire globe got stagnant due to the deadly virus,” she said.

The prime minister said Bangladesh was not spared from the COVID-19 onslaught, adding the fear of deaths and invisible power have stalled the whole country.

Sheikh Hasina said the month of mourning begins through arranging voluntary blood donation programme by the BKL and thanked the organisation for arranging the programme in memory of the Father of the Nation to save the life of the critical patients.

The prime minister also thanked the leaders and workers of AL and its associate bodies including BKL, Chhatra League, Jubo League, Secchasevak League to help the farmers harvest paddy and distribute relief materials among the people, and for burial of those who died from coronavirus.

BKL President Krishibid Samir Chanda presided over the function, while its General Secretary Umme Kulsum Smiriti, MP, spoke, among others.