Criminals gangrape wife tying husband up with CNG in Chattogram 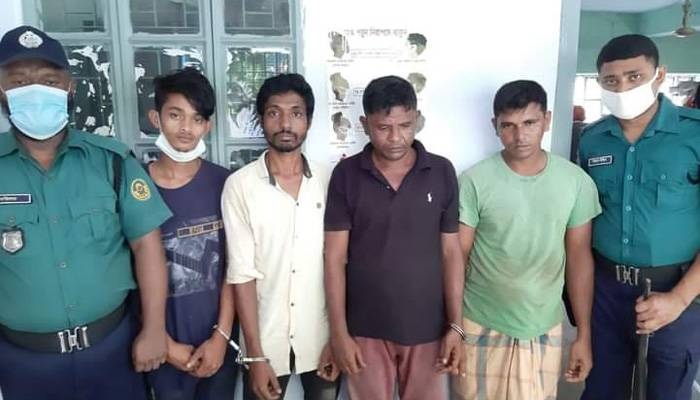 online desk ; An organised gang of criminals have raped a woman tying up her husband with a CNG-autorickshaw at Shaheed Nagar area in the port city of Chattogram.

The incident happened at about 10:30 on Saturday night.

Receiving an emergency phone call at 999, police rescued the woman and her husband conducting a raid at Salma Colony in Shaheed Nagar area at about 2:00am.

Later, the husband filed a case accusing five people. Police arrested four of the five accused. The arrested were Badsha Mia, 36, Jabed, 28, Robin, 19, and Ibrahim, 30. However, the mastermind of the incident remains absconding.

Additional Deputy Commissioner (North) of Chattogram Metropolitan Police (CMP) Ashiqur Rahman said both the couple was returning home from Wapda Gate at about 10:30pm on Saturday. At that time, one Shafi waylaid them near Alpana Community Centre at Oxygen More and wanted to know about their identities. When they said they were husband and wife, Shafi deliberately expressed suspicion. He called in Badsha, Jabed, Robin and Ibrahim over phone. Arriving at the place, they took the couple to Shaheed Nagar area by an autorickshaw. Then they took them to a house at Salma Colony. The CNG’s owner was Badsha.

Bayezid Police Station’s officer-in-charge (OC) Priton Sarkar said police went to the house and found the husband was tied up with the autorickshaw. Receiving a call on 999, a police team went there at baout 2:00am and rescued the couple. The victim was later admitted to the one stop crisis centre (OCC) at Chattogram Medical College Hospital.