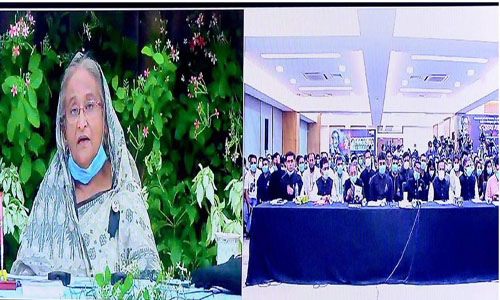 Online Desk ; Prime Minister Sheikh Hasina on Sunday hoped that history will one day expose the conspirators of the August 15, 1975 massacre.

“This is correct the conspirators behind the scene couldn’t be found yet…this history will one day be revealed…this information will be out, someday this will definitely come out,” she said.

The Prime Minister said this while delivering her speech at a programme of Bangladesh Chhatra League (BCL) held at Awami League central office at 23 Bangabandhu Avenue marking the National Mourning Day, reports UNB.

She joined the programme virtually from her official residence Ganobhaban.

Sheikh Hasina, the chief patron of BCL, said the killers had tried to shatter the pride of the nation and the country through killing him (Bangabandhu Sheikh Mujibur Rahman).

“We’ve held the trial of killers and with this we’ve ensured that justice prevails in this country…there’re some killers still absconding,” she said.

By killing Bangabandhu, the Prime Minister said, the killers thought that they would be able to erase his name, the sacrifices of millions of martyrs and thousands of women, and Bangladesh would turn helpless without any direction and ideals.

“That means they tried to totally destroy the country’s prospect of advancement in terms of education and economy, getting free from poverty, and will stay in the world with its head high. They tried to demolish the ideals on which Bangabandhu liberated the country,” Hasina said.

After the killing of the Father of the Nation, she said, Ziaur Rahman, HM Ershad and Begum Khaleda Zia made power as a tool to enjoy. “To me, power is a responsibility towards people.”

Hasina said those who want to join politics have to adopt patriotism, making sacrifice for the people of the country as their virtue. Otherwise, she said, the leadership would not be able to give anything to the nation and the country.

“To give people something, one has to forget about himself or herself first as they’ve to think about people and have to work for them. Personal gain or prosperity must not come in one’s mind while engaging in the works to do the welfare of people. If anyone thinks that then he or she cannot do anything for people. If you work for people you must be evaluated one day, no one can stop it,” she said.

The Prime Minister highlighted the sacrifice of her mother Bangamata Fazilatunnesa Mujib saying that her mother was beside Bangabandhu throughout her life.

“My father could fully engage in the service of the country as he got such a companion beside him…this is very rare. Had my mother not stood beside him like that way, I wonder, whether Bangladesh would have been liberated or not,” she said.

Talking about the forced disappearance and killing, she recalled the horrible days of the Ziaur Rahman regime and said he introduced these things in the country.

Sheikh Hasina said her primary aim is to build Golden Bengal as dreamt by the Father of the Nation.

She asked the BCL activists and leaders to be imbued with patriotism and follow the ideals of the Father of the Nation.