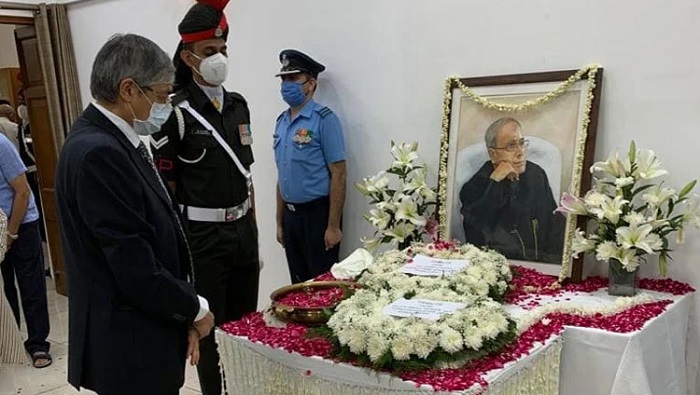 The High Commissioner also talked to Sharmistha Mukherjee, daughter of Mukherjee, and conveyed the Prime Minister’s condolences to her family.

Mukherjee’s body was taken to his official home in Delhi, 10 Rajaji Marg, for people to pay their last respects.

His funeral took place on Tuesday with full military honours.

The former Indian President died on Monday at the age of 84, weeks after his brain surgery.

The government of India and many states have announced seven-day official mourning.

Sheikh Hasina, in her message earlier, recalled Mukherjee’s ‘outstanding’ and ‘unforgettable’ contribution to the 1971 Liberation War as a politician and real well-wisher. “I always recall with profound respect his invaluable contributions to our Liberation War,” she said.

She said Pranab Mukherjee always provided his support to her family while they were in exile in India after the assassination of Father of the Nation Bangabandhu Sheikh Mujibur Rahman on August 15, 1975.

“In such a bad time, he always enquired about my family and stood beside my younger sister Sheikh Rehana and us in any necessity. Pranab Mukherjee provided cooperation and courage even after our return to Bangladesh,” she said.

“He (Pranab Mukherjee) is our guardian and family friend. He always gave courage to us in any crisis,” the PM added.

“With his death, India lost a wise and patriotic leader, while Bangladesh a close person,” she said.

Terming Pranab Mukherjee a celebrated politician of this sub-continent, she said he will remain alive as a glittering star in the politics of the sub-continent.

Sheikh Hasina prayed for the salvation of the departed soul and conveyed deep sympathy to the bereaved family members.