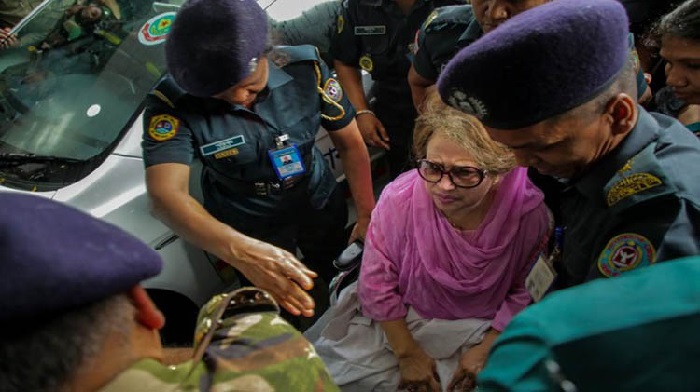 Online Desk : The prayer seeking extention of BNP Chairperson Khaleda Zia’s parole has reached the Ministry of Law. Law Minister Anisul Huq said the prayer had reached the Law Ministry from the Home Ministry on Wednesday.

“I have received the prayer. We’ll take a decision in this regard soon,” he told journalists.

Earlier, the Law Minister said on Monday that a decision would be taken considering the prayer submitted by Khaleda Zia’s family members and her health condition.

“The Home Minister told me that he had received a prayer. Since the parole of Khlaeda Zia is going to be ended on September 24 next, they want extension of that parole,” Anisul Huq said.

The Law Minister said, “Khaleda Zia is not on bail. No court has granted her bail. In March last, her family members requested the Home Minister to release her on an executive order for treatment. Taking the humanitarian ground into consideration, the prime minister ordered us to release Khaleda Zia for six months staying her conviction under the Section 401 (1) of the Criminal Procedure (CrPc). And, she was released on March 25 last.”

The Home Ministry took the recommendations of the Law Ministry to release former Prime Minister Khaleda Zia temporarily who was awarded 17 years of jail in two corruption cases. The six-month parole for her release is going to end on September 24. Before that the family submitted a prayer seeking to extending the parole.