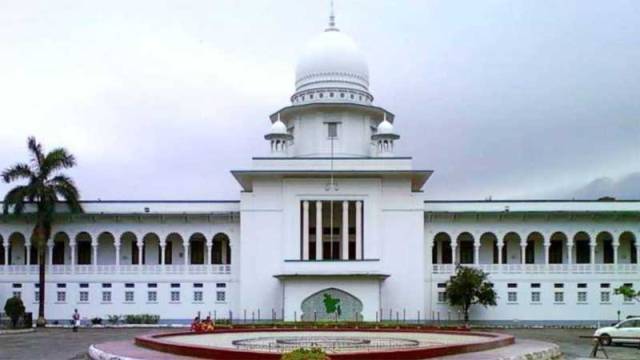 Online Desk : The High Court on Thursday questioned asking why the law enforcers convene press conferences immediately after the arrest of accused in any incident before the ending of the trial.

“Such excercises influence the investigation of the cases concerned and also their trial processes,” the HC said.

At the same time, the HC expressed surprise about the telecast of talk shows on televisions on the cases under investigation. “It creates the possibility of media trial,” it said.

A High Court (HC) bench of Justice M Enayetur Rahim and Justice Md Mostafizur Rahman made the remarks during the hearing of a review petition over the coming back of a female student alive who was allegedly raped and killed in Narayanganj.

Appearing before the court with all the case documents, two investigation officers explained about the incident on Thursday. The HC bench also raised question whether it was normal to confess the crime by the accused during the investigation of the case.

The court said there is not a single precedence in the world that the accused confessed his or her crime spontaneously. But in this case the accused gave confessional statements about rape and murder without committing the crime at all. Investigation of the case is questionable. How the accused confessed about rape and murder without commiting those crimes, the HC asked. “It’s very confusing,” the HC observed.

After the hearing was over, the court fixed September 24 for delivering the judgement.

On August 26, the HC has asked the authorities concerned to produce all the documents before court, including the confessional statements of the three accused, in a case filed over the return of a girl who was thought to be gang-raped and murdered.

The court also has summoned two investigating officers involved in the case, asking them to appear before the court on September 17.

Earlier on August 25, a revision petition was filed at the HC seeking its directions to summon documents in connection with the ‘murdered’ schoolgirl’s returning alive after 49 days of going missing.

According to the girl named Disha, a fifth-grader who went missing on July 4, her father filed a kidnapping case with Narayanganj Sadar Model Police Station on August 6.

Later, police arrested three individuals – Abdullah, Rakib and Khalil – in this connection. The arrested persons were sent to jail after they had testified under Section 164 in court.

In their confessional statement, the accused admitted that they killed the girl after raping her and dumped her body in the Shitalakhya River.

However, the student was found alive on August 23, and is currently under the custody of Narayanganj Sadar Police Station.