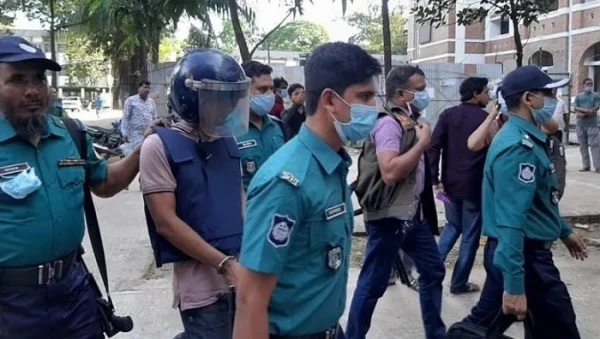 Online Desk : Three accused in the case filed for gang-rape of a housewife at Sylhet MC College hostel gave confessional statements to court on Friday after their remand was over.

The accused were produced before the Sylhet Metropolitan Magistrate-1 court in the afternoon, said Amulya Kumar Chowdhury, assistant commissioner (Prosecution).

He said the court of Sylhet Metropolitan Magistrate-2 placed Saifur, Arjun and Rabiul on five-day remand each on Monday. Following the remand, they were produced before the court and they gave confessional statements.

The remand of the arrested accused Rajon, Aynul and Rony will be over on Saturday. They would also be produced before the court.

Besides, the remand of third accused Tareq and sixth accused Mahfuzur Rahman Masum will end on Sunday.

At night on Friday last (September 25), the woman was gang-raped allegedly by Bangladesh Chhatra League (BCL) men at the MC College hostel in Sylhet.

A group of six or seven culprits dragged the woman into the dormitory and raped her after beating and tying up her husband when the couple went to visit the college at Tilagarh area in the evening.

Being informed, police rescued the couple from the dormitory area around 10:30 pm and admitted the victim to the One-Stop Crisis Centre at Sylhet MAG Osmani Medical College and Hospital.

On the following day, the victim’s husband filed a case at the Shah Paran Police Station accusing nine people, including six BCL men.

After the incident, police raided the dormitory and seized some local and foreign-made arms.

All the accused in the case were subsequently arrested and are now in police custody. They were arrested from different places in Sylhet, Sunamganj, and Habiganj. Later, they were sent to remand through court.

Meanwhile, the samples of the accused were drawn on Thursday afternoon at One-Stop Crisis Centre at Sylhet MAG Osmani Medical College and Hospital.

Their samples would be cross-matched with the sample of the victim.

Samples were drawn from the main accused in the case Saifur Rahman, who was arrested at Chhatak in Sunamganj on Sunday, Arjun Lashkar, Robiul Islam, Shah Mahbubur Rahman Rony, Rajon Mia and Ainuddin.

All of the accused are Bangladesh Chhatra League activists.

Meanwhile, the Education Ministry formed a three-member committee to investigate whether there was any negligence of the college authorities in the gang rape incident at MC College dormitory.

The High Court also formed an investigation committee to look into the incident.

Home Minister Asaduzzaman Khan has said none of those involved in the incident will be spared.