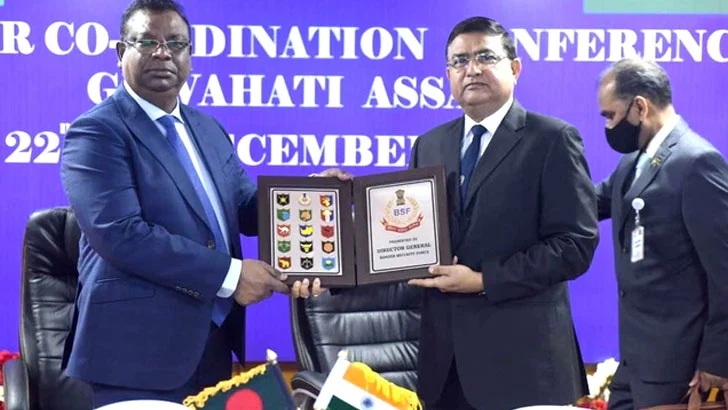 It was mentioned in press release sent by the BGB in Dhaka.

During the talks, the BGB DG requested his counterpart BSF DG Rakesh Asthana to destroy the hideouts of different CHT terrorist groups in Mizoram.

In response, the BSF DG, citing about the “zero tolerance policy” of the Indian government against terrorism, assured the BGB DG of taking “appropriate measures” against the terrorist hideouts.

BGB Director General Major General Md Shafeenul Islam also expressed his grave concern over the killings, injuring and beating up of unarmed Bangladeshi civilians by BSF and Indian nationals in the bordering areas.

“People of Bangladesh always appreciate the existing excellent relationship between the two border guarding forces and expect that BGB and BSF will take necessary measures to bring down the death cases to zero,” he said, said a joint statement.

Both the BGB and BSF agreed to conduct joint night patrols in vulnerable areas along the border “as a more effective initiative to reduce border killings to zero”.

The border conference began on December 22 last and will conclude on Saturday. An 11-member team comprising the officials of the Prime Minister’s Office, Home Ministry, and Foreign Ministry led by BGB DG Major General Md Shafeenul Islam took part in the conference.

On the other hand, a 12-member delegation including the officials from the Indian Home and External Affairs ministries led by BSF DG Major General Rakesh Asthana joined the five-day conference.