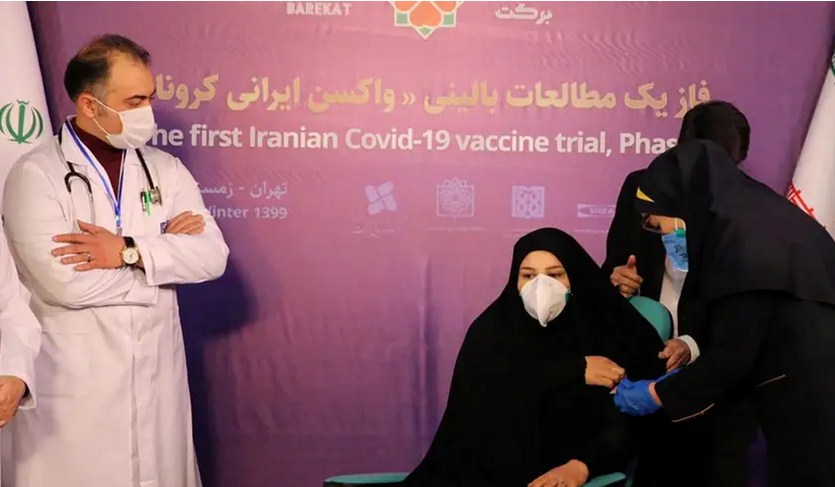 Online Desk ; The first study of the safety and effectiveness of a coronavirus vaccine in Iran began Tuesday, state TV reported, with dozens due to receive the domestically developed shot even as details about its production remained slim.

The vaccine, the first in the country to reach human trials, is produced by Shifa Pharmed, part of a state-owned pharmaceutical conglomerate known as Barekat. The company’s website describes it as involved in the large-scale production of antibiotics and penicillin, without offering any details about its coronavirus research, results of animal trials or previous vaccine development since its founding in 1995.

Iran has struggled to stem the worst virus outbreak in the region, which has infected over 1.2 million people and killed nearly 55,000.

The study, a Phase 1 clinical trial, will enroll a total of 56 volunteers to receive two shots of the Iranian vaccine within two weeks, according to Hamed Hosseini, a clinical trial manager. Results are to be announced roughly a month after the second shot. Three people received the first injections on Tuesday in a ceremony at a Tehran hotel attended by the country’s health minister. State TV announced that none of the injections had so far caused any “fevers” or “bodily shocks.”

“I am happy that the scientific process went ahead in a proper way,” said Tayebeh Mokhber, daughter of the Setad Foundation chairman, who was the first to get jabbed. “I hope the conclusion will be health for our people.”

The Setad Foundation, controlled by the office of Iran’s supreme leader, oversees the Barekat conglomerate.

The treatment, dubbed Coviran, is a so-called inactivated vaccine, meaning it is made of a coronavirus that’s been weakened or killed by chemicals, similar to how polio immunizations are made. Leading Western vaccines, like the shot made by Pfizer and its German partner BioNTech, use newer, less-proven technology to target the coronavirus’ spike protein using RNA.

Iranian authorities expect to the vaccine to hit the market by late spring 2021, an extremely aggressive timeline. Before this year’s fast-tracked development of coronavirus vaccines, the usual methods of testing a vaccine for safety and efficacy with mass trials could take up to a decade.

With government-funded research into viral proteins and genetics accelerating the development of vaccines worldwide, countries have approved vaccines for emergency use and launched inoculation programs at record-breaking speed.

American drug makers Pfizer and Moderna received endorsements after reporting their vaccines were more than 90% effective at protecting against the coronavirus in large, advanced clinical trials. China and Russia approved their vaccines for emergency use while still in late-stage testing. Their early interim data, although promising, lacks clarity and raises questions about vaccine efficacy.

Iran has not elaborated on its regulatory approval process or plans for more advanced trials.

President Hassan Rouhani has said Iran is cooperating with a “foreign country” to produce another vaccine expected to run in tests in human volunteers in February, without offering further details.

The government has touted Iran’s domestic vaccine research, repeatedly alleging that tough American sanctions undermine efforts to purchase foreign-made vaccines and launch mass inoculation campaigns like those underway in the U.S. and Europe. While U.S. sanctions do have specific carve-outs for medicine and humanitarian aid to Iran, international banks and financial institutions hesitate in dealing with Iranian transactions for fear of being fined or locked out of the American market.

Still, Iran retains routes to imported vaccines, including through COVAX, an international program designed to distribute coronavirus vaccines to participating countries around the world. On Monday, Iran said it expects a group of U.S.-based benefactors to ship thousands of Pfizer coronavirus vaccine in the coming weeks.