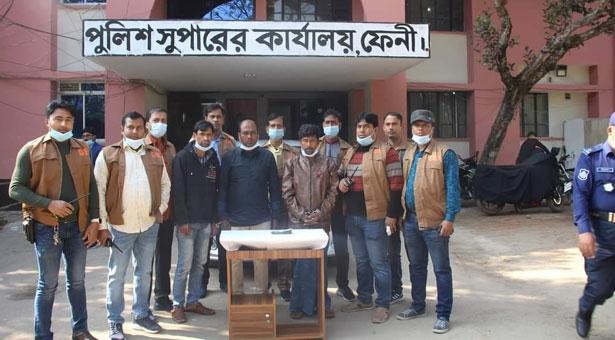 Online Desk : Feni district detective branch (DB) of police have arrested three persons 70 days after the robbery of Tk 27 lakh at Dagonbhuiyan in the district.

Police also seized cash Tk 50,000 and a used private car from their possession.

The DB said six to seven persons involved in the robbery have remained absconding.

On October 21 last, one Abu Zafar, an agent banking trader, drew Tk 27 lakh 62 thousand from Dagonbhuiyan branch of Islami Bank Limited. At that time, the robbers targeted him. After Abu Zafar left the bank with his money, the robbers waylaid him and abducted him by a car. They later threw him out of the car at Dayapur in Cumilla and vanished with his money.

The victim Abu Zafar filed a case at Dagonbhuiyan Police Station on the same day.

Later, the Feni District DB police took charge of the case. They succeeded to identify three robbers using the closed-circuit camera footage and modern technology. The robbers were then arrested from different parts of capital Dhaka.

During the questioning, the arrested persons said nine persons were involved in the robbery. They came from different districts. There are a number of cases relating to mugging, robbery and extortion against them with different police stations in the country.

Preparations were going on to send the accused to court.