Girl child killed for protesting kisses on face by man 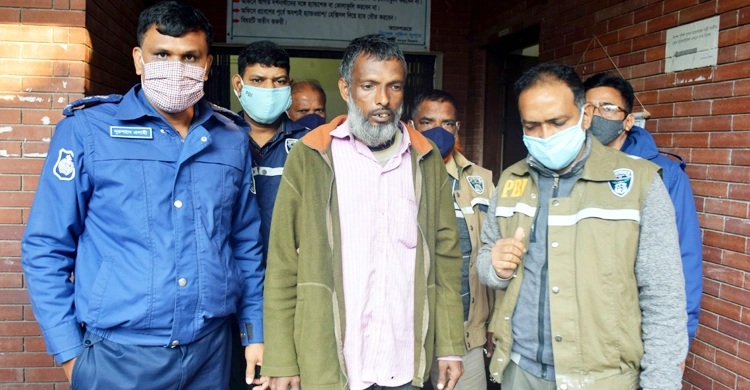 Online desk ; A person was arrested by police for allegedly killing a girl child after she protested kissing on her face in Rangpur district.
The 45-year old Jahurul Huq Rana alias Chokku was arrested by Police Bureau of Investigation (PBI) from Keranipara area in Rangpur city on Wednesday for allegedly killing the four-year old girl child Maisha Akter.

It was disclosed by Rangpur PBI Police Super ABM Zakir Hossain while addressing a press conference at his office on Thursday afternoon.

The PBI police super said the family of the girl child and accused Jahurul Huq Rana alias Chokku are neighbours. Maisha was the daughter of grill-mechanic Monwar Hossain of village Barabari Sarkarpara under Ward No. 14 in Rangpur city. She used to call Chokku as ‘dadu’ (grandpa).

“Chukku lives alone at his house. At about 2:00pm on Monday (Dec 28), he gave Maisha a two taka note to buy moa (made of molasses and puffed rice). When the four-year old brought moa, the 45-year old Chokku took her inside his house tactfully and gave several kisses on her cheeks. At that time, Maisha hit Chokku with a bamboo stick. Being angry, Chokku pushed the girl forward sharply. As Maisha fell on a nearby bamboo, she died on the spot. Then he concealed the body inside the house putting it in a sack. Later, at about 11:00 at night Chokku dumped Maisha’s body into a nearby ditch of neighbour Shahin and went into hiding,” ABM Zakir Hossain.

Seeing Maisha’s body lying on the edge of the ditch, locals informed police on Tuesday (Dec 29) morning. Later, police went there. After Maisha’s father Monwar Hossain filed a case with Kotwali Police Station of Rangpur Metropolitan Police (RMP), the Rangpur PBI took over the charge of investigation of the case.

At one stage of investigation, Jahurul Huq Rana alias Chokku was arrested from Keranipara area. He was later produced before a Rangpur court where he gave statement confessing the killing of Maisha.