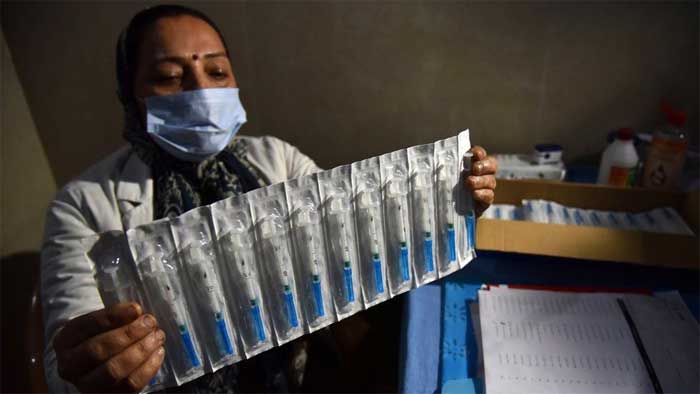 Online Desk : India will begin exporting locally-made coronavirus vaccines within a fortnight of their launch, a foreign ministry official has told the BBC.
The official dismissed reports that India would ban exports of vaccines it is producing to meet local demand.

India makes about 60% of vaccines globally and many countries are eagerly waiting for it to begin shipping doses.

It has formally approved the emergency use of two vaccines as it prepares to begin giving jabs in January.

India plans one of the world’s biggest inoculation, seeking to immunise about 300 million people by July.

The country’s drugs regulator has given the green light to two vaccines – one developed by AstraZeneca with Oxford University (Covishield) and one by local firm Bharat Biotech (Covaxin).

The foreign ministry official confirmed that India’s plan to help other countries was on track.

“Within a fortnight of the rollout of the vaccines we will allow exports to some of our South Asian neighbours. Some of these exports will be paid by us as gifts, and the others will be supplied at roughly the same price the government will be buying the vaccines at,” the foreign ministry official, who preferred to remain unnamed, told me.

“India is completely conscious of its commitments to neighbours and the rest of the world as the world’s biggest vaccine maker.”

Federal Health Secretary Rajesh Bhushan said India plans to roll out Covid-19 vaccines by the middle of this month.

“Within 10 days from the date of Emergency Use Authorisation [3 January], there will be vaccine roll-out,” he told reporters in Delhi.

The CEO of the Serum Institute of India, which is manufacturing the Oxford/AstraZeneca vaccine in India, also sought to clarify the confusion over exports.

Adar Poonawalla had been quoted in the media as saying that India would not allow exports of his vaccine for “several months”. He told the Associated Press that his company has been barred from exporting the vaccine and selling the vaccine in the private market.

But on Tuesday he told the BBC’s Yogita Limaye his firm was allowed to export the vaccine for government immunisation programmes abroad, and expects to deliver on agreements with Bangladesh, Saudi Arabia and Morocco in the next few weeks.

On Monday, he said his firm could only give the vaccines to the government, and that the first 100 million doses would be sold at a special price of 200 rupees ($2.74), “after which the price will be higher”.

This raised concerns in India’s neighbouring countries, including Nepal and Bangladesh, which are primarily depending on the SII to start vaccinating their populations.

Bangladesh had already ordered 30 million doses of the vaccine in the first phase, Reuters reported. The country’s health secretary told local media in December that it expected the first batch of the jab by February.

Serum Institute and Bharat Biotech have a combined stockpile of more than 70 million doses of Covid vaccines, and will scale up production enormously to meet the rising demand.

On Tuesday, the two vaccine makers released a joint statement saying both the companies would provide “global access for our Covid-19 vaccines”.