In Kashmir, empty grave for teenager killed by Indian forces 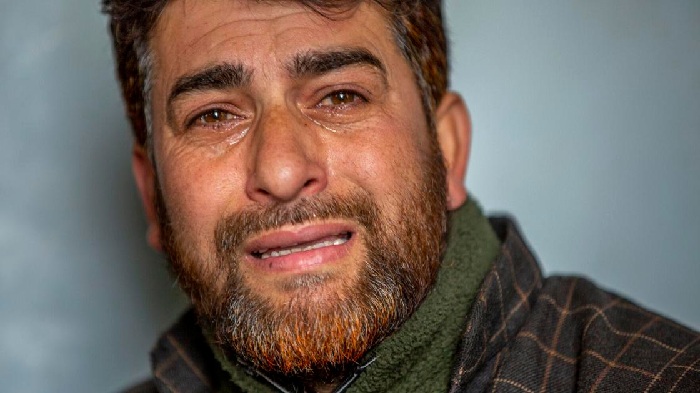 Online desk : On a recent chilly winter day in Indian-controlled Kashmir, Mushtaq Ahmed shoveled the earth, laboriously digging a grave for his teenage son. There was, however, no body to be lowered inside.
Stunned, a group of onlookers watched in silence. But Ahmed kept digging, now knee-deep inside the half-dug grave.
Then he rose, straightening his back, and faced the crowd, enraged.

Police said government forces fatally shot Ahmed’s 16-year-old son, Athar Mushtaq, and two other young men when the men refused to surrender on the outskirts of Srinagar city on Dec. 30. They described the men as “hardcore associates of terrorists” opposed to Indian rule.

The men’s families insist they were not militants and were killed in cold blood. There was no way to independently confirm either claim.

“It was a fake encounter,” a grieving Ahmed cried, as the crowd that gathered around him in the graveyard in southern Bellow village shouted slogans demanding justice.
Authorities buried them at a remote graveyard 115 kilometers from their ancestral villages.

Under a policy started in 2020, Indian authorities have buried scores of Kashmiri rebels in unmarked graves, denying their families proper funerals. The policy has added to widespread anti-India anger in the disputed region.

India has long relied on military force to retain control over the portion of Kashmir it administers. It has fought two wars over the region with Pakistan, which also claims the mountainous territory. An armed uprising since 1989 against Indian control and subsequent Indian crackdown have killed tens of thousands of civilians, rebels and government forces.

In August 2019, India revoked Kashmir’s semi-autonomous status, clamped curfews and communication blackouts and arrested thousands, sparking an outrage and economic ruin. Since then, authorities have brought in a slew of laws and implemented policies that locals and critics view as part of India’s settler colonialism project in the volatile region.
Kashmiris for years have accused Indian troops of targeting civilians and abuse of power with sweeping impunity. Troops have been accused of staging gunfights and then saying the victims were militants to claim rewards and promotions.

Athar’s killing came months after a rare admission of wrongdoing by the Indian military, which conceded that soldiers exceeded their legal powers in the deaths of three local men it initially described as Pakistani terrorists. Police concluded that an Indian army officer and two civilian “army sources” killed the three laborers “after stripping them of their identities and tagging them as hardcore terrorists.” The officer has been charged with murder.

Kashmiris’ fears and rage over such incidents have been exacerbated by the new policy of not identifying those killed or their associates and refusing to return their bodies to their families.

Authorities say the policy is aimed at stopping the spread of the coronavirus, but rights activists and residents say it is an attempt by the government to avoid large funerals that fuel more resentment against India.

The inspector-general of police, Vijay Kumar, said in a recent interview with The Hindu newspaper that the policy “not only stopped the spread of COVID infections but also stopped the glamorizing of terrorists and avoided potential law and order problems.”
Authorities, however, have not stopped state-sponsored funerals for government forces killed in combat with the rebels.

“Not returning the bodies of the slain is a humiliation to humanity,” said Zareef Ahmed Zareef, a civil rights campaigner and prominent Kashmiri poet.

Distraught families of militants and civilians killed by government forces have repeatedly demanded that Indian authorities, which are predominantly Hindu, allow final rituals and proper burials at ancestral villages under the Muslim faith. The pleas have been repeatedly denied. Families have sometimes discreetly visited the remote graveyards and marked the graves of their kin with stones and scribbled their names with paintbrushes.

Until last April, Indian forces had handed the bodies of rebels to their relatives for burial. Since then, according to police, 158 militants have been buried at isolated locations.