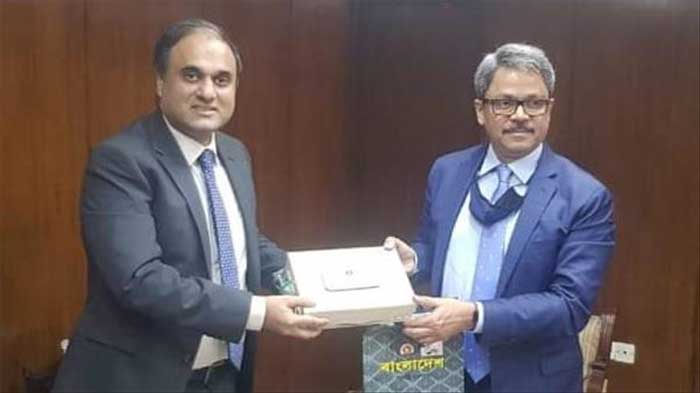 Online desk : Pakistan’s envoy to Bangladesh confirmed Thursday that Islamabad has lifted all restrictions on visas for Bangladeshi citizens.

“Pakistan has already removed all restrictions on Pakistani visas for Bangladeshi citizens,” said a statement issued by the Pakistan High Commission in Bangladesh after a meeting between Pakistani High Commissioner Imran Ahmed Siddiqui and Bangladesh’s State Minister for Foreign Affairs Md. Shahriar Alam.

Speaking to Anadolu Agency after the meeting, Siddiqui said they are waiting for the same response from the Bangladeshi side.

“Bangladesh’s restrictions on Pakistani nationals are still in place, and that is why I informed the state minister that we have already lifted all bars from our side,” he said.

The move is being seen as an ice breaker in the frosty relations between the two South Asian countries. Bangladesh gained independence from Pakistan after a nine-month war in 1971.

Bilateral relations between the two countries turned sour once again in 2016 surrounding Bangladesh’s trial for crimes against humanity in 1971 in a newly formed controversial tribunal.

The clouds seemed to be clearing up following a rare phone call last July by Pakistani Prime Minister Imran Khan to his Bangladeshi counterpart Sheikh Hasina. Since then, the Pakistani envoy has met Hasina and her Foreign Minister AK Abdul Momen separately where both sides discussed various bilateral issues in a cordial environment.

During Thursday’s meeting, Dhaka reiterated its willingness to engage more with Islamabad.

“We look forward to engaging with Pakistan,” Minister Alam told the envoy, according to a separate statement issued by the Bangladeshi Foreign Ministry.

Both sides agreed on the need to hold long-pending foreign office consultations, which were last held in 2010, it added.

“The current trade balance tilts towards Pakistan,” he said.

During the meeting, the Pakistani side emphasized addressing all non-trade barriers in order to establish “productive commercial relations.”

Alam also reiterated Dhaka’s long-standing demand for an official apology from Islamabad for the incidents that happened during the 1971 war.

The Pakistani envoy also handed over a signed copy of the Tripartite Agreement of 1974 to the Bangladeshi state minister “which had addressed all the outstanding issues between the two countries.”

“The agreement should serve as a foundation for further strengthening of the existing fraternal relations,” the embassy statement quoted Siddiqui as saying.