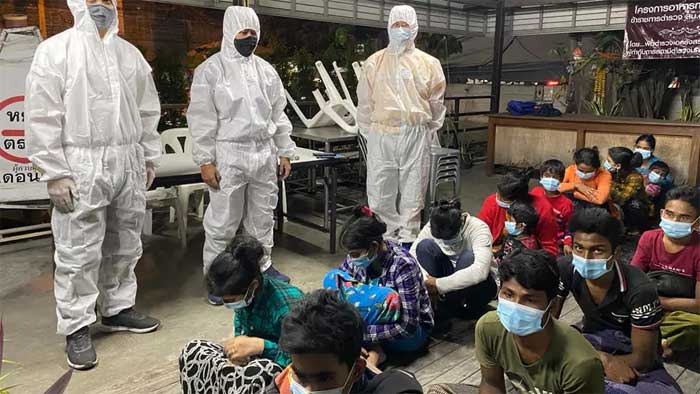 Online Desk ; Nineteen Rohingya and a Thai woman accused of housing them have been arrested for illegal entry to Thailand, police said Saturday, as concerns grow about trafficking routes for the Muslim minority fleeing Myanmar.

The embattled Rohingya have long faced persecution in Myanmar, where they are denied freedom of movement and citizenship, and lack access to work, healthcare and schools.

A 2017 military crackdown in western Rakhine state sent almost 750,000 fleeing across the border to Bangladesh, while many choose to embark on treacherous journeys with human smugglers to reach Malaysia and Indonesia, sometimes going through Thailand.

Thai police said the latest trafficking operation was discovered this week when 19 Rohingya were found in a house in Bangkok’s Don Mueang district.

“Police also managed to arrest one Thai woman in Pathum Thani province (near Bangkok) on the charge of providing shelter to the Rohingya,” Colonel Kissana Phathanacharoen, the deputy police spokesman, told AFP.

The group was smuggled into Thailand overland from Rakhine state and was bound for Malaysia, said an immigration officer who declined to be named.

“They didn’t know what kind of work they would find in Malaysia, they just wanted to get out of Rakhine,” he said, adding that the Thai woman’s husband — still at large — had promised them jobs.

Out of the 19 Rohingya, seven tested positive for coronavirus and are being treated, said the officer, while the rest are being kept in quarantine as a precaution.

Thailand was thrust into the international spotlight in 2015 during the so-called “boat crisis”, which saw desperate Rohingya and Bangladeshi migrants stranded at sea and abandoned by their traffickers.

Police officers, a high-ranking general and several politicians were among scores convicted for their role in the trafficking network, which spilled into full view after officials found dozens of shallow graves in hidden camps near the Malaysian border.

Kissana said the latest discovery of the 19 Rohingya — along with the threat of the coronavirus spreading — has authorities worried.

“The chief of Thai police has expressed his concern over the issue of police being potentially involved with the smuggling scandal, so he has ordered subordinates to strictly follow the law,” Kissana told AFP.

Earlier this week nearly 100 Rohingya bound for Malaysia were arrested in a raid in Yangon. Authorities are still investigating if the smugglers are part of a wider network.