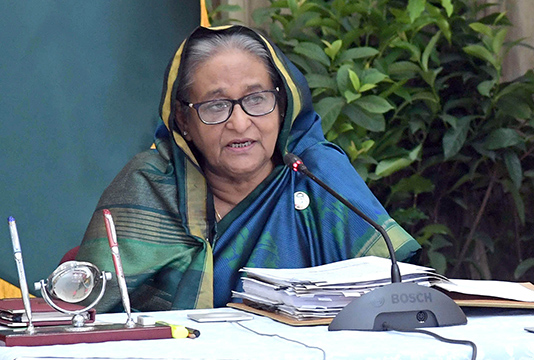 Online Desk : Prime Minister Sheikh Hasina on Monday said it has been possible for the Awami League government to make Bangladesh a role model of development in the world since it is there in state power for a long time.

“The whole world respects today’s Bangladesh …the government has been to do that as a scope has been created for it due to its long stay in power,” she said, reports UNB.

The Prime Minister was speaking at the regular weekly cabinet meeting held at Bangladesh Secretariat attending it virtually from her official residence Ganobhaban.

She said once Bangladesh used to be known for natural calamities, cyclones, flood and poverty. “But no-one talks about that these days. Rather Bangladesh has made an example in the whole world how to achieve development, reduce poverty, generate employment, develop the lifestyle of people and provide healthcare. This trend has to be continued.”

With the continuation of the government’s aims, including Perspective Plan and 8th Five Year Plan, the Prime Minister said, Bangladesh can achieve further progress.

She expressed her gratitude to the people of the country for giving her the scope with their mandate in the last three general elections.

“We’ll build a Bangladesh where no one will remain homeless…. every home will be illuminated with electricity…we’ll fulfil the basic demands of people from education to healthcare. We’ll create jobs and advance the country,” Hasina added.

Talking about the Padma Bridge issue, the Prime Minister said one famous person had raised questions about this bridge and that individual committed the notorious job just for simply holding the managing director’s post of a bank.

“It was very much unfortunate,” she said without mentioning anyone’s name.

Sheikh Hasina also mentioned that the government took the matter as a challenge and had decided to build the bridge with its own resources and that bridge is now a reality.

“This particular one decision has changed the image of Bangladesh across the world. And this proves that Bangladesh is not dependent on anyone,” she added.

The Prime Minister put emphasis on the continuation of this image and building the country’s dignity further. “Bangladesh has to be established as a dignified nation.”

Hasina said the vast workforce of the country and other resources have to be utilised properly to take the country forward.