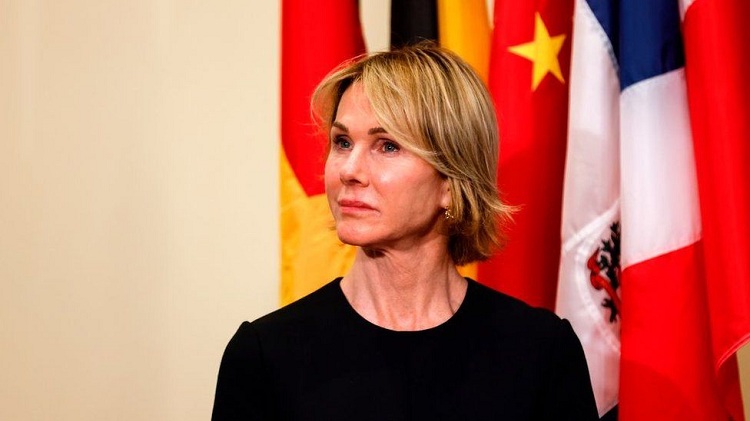 Online desk ; A top US diplomat’s upcoming trip to Taiwan as Washington ends decades-old curbs on contacts with Taipei has again escalated Sino-American tensions.
Kelly Craft, the US ambassador to the UN, is due to arrive in Taipei on Wednesday for a three-day visit.

Self-governing Taiwan, which Beijing claims as its own territory, has hailed the shift in diplomatic relations.

Ambassador Craft’s visit comes after a year of mounting hostility between Washington and Beijing.

The democratic island of Taiwan has been a major thorn in the deteriorating relationship. Under President Trump the US has established closer ties with Taipei – ramping up arms sales and sending senior officials to the territory despite fierce warnings from China.

Most recently, Secretary of State Mike Pompeo said the US would end the “self-imposed restrictions” on contacts between US and Taiwan officials that were introduced decades ago to “appease” the mainland Chinese government, which lays claim to the island.

At the same time the US has bitterly clashed with Beijing on multiple fronts including trade, human rights and the coronavirus pandemic.

Why is this trip happening now?

The high-profile visit was only announced late last week by Mr Pompeo.

At the end of a statement condemning the mass arrests of democracy advocates in Hong Kong, he also added that Ambassador Craft would visit Taiwan.

It will make her the third senior American official sent to the island since August on a trip that begins just a week before the inauguration of Joe Biden as US president and the end of Mr Trump’s term.

Taiwan was “a reliable partner and vibrant democracy that has flourished despite CCP [Communist Chinese Party] efforts”, Mr Pompeo said in characteristically direct language, adding: “Taiwan shows what a free China could achieve”.

It appears designed to “fling mud in China’s eye” and make things “harder for the incoming Biden administration”, he told the BBC.

Such “chaotic, imprudent” steps have been “customary” under Mr Trump, Dr Resnick added, saying the trip would likely bring “even more instability” to Sino-American relations at a time the US should be cooperating with China on issues such as the pandemic and climate crisis.

How will this bode for Biden?

The trip has already triggered an angry response from China, further damaging its relationship with the US as Mr Biden prepares to take over.

“The United States will pay a heavy price for its wrong action,” the Chinese mission to the UN said in a statement last week in response to Ambassador Craft’s planned trip.

Beijing reiterated its sharp warning to the US a few days later, when Mr Pompeo announced that America would scrap the long-time restrictions on its interactions with Taiwanese officials.

“Any actions which harm China’s core interests will be met with a firm counter-attack and will not succeed,” Chinese foreign ministry spokesman Lijian Zhao told reporters on Monday.

The substance of the new US administration’s policies on China and Taiwan remains to be seen but Dr Resnick believes a “much more coherent” strategy will be deployed.

“It’s going to want to repudiate so many of Trump’s polices,” he said, adding that Beijing may just be waiting to see what the incoming administration does and “whether it starts to cool temperatures a bit”.

What is the China-Taiwan divide about?

China and Taiwan have had separate governments since the end of the Chinese civil war in 1949.

Beijing has consistently tried to limit Taiwan’s international activities and both have vied for influence in the Pacific region.

It’s why Ambassador Craft’s trip is highly symbolic, as Taiwan is not a member of the UN or most global institutions due to Beijing’s objections.

The US has no official diplomatic ties with Taipei – like most nations – though it is bound by law to provide the island with the means to defend itself.

So the ending of long-time restrictions governing official contacts announced by Mr Pompeo over the weekend marked a major shift in relations. Taipei immediately hailed the move as ending “decades of discrimination”.

Tensions between China and Taiwan have intensified in recent years and Beijing has not ruled out the use of force to take the island back.

In the face of these growing threats, Taiwan’s government has not held back in asserting itself.

On her re-election for a second term last year President Tsai Ing-wen told the BBC that the sovereignty of Taiwan was not up for negotiation.

“We are an independent country already and we call ourselves the Republic of China (Taiwan),” she said.