Top US generals condemn Capitol attack in message to troops 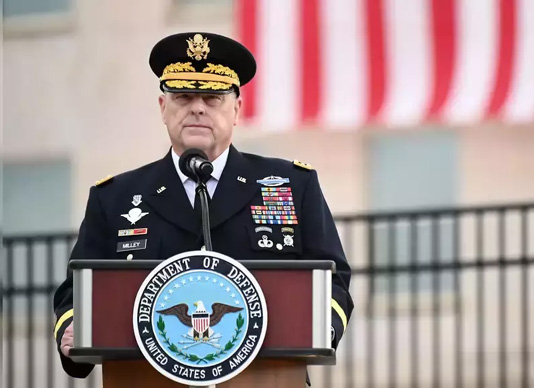 Online desk ; The Pentagon’s top generals condemned the January 6 attack on the Capitol by Trump supporters on Tuesday, telling US troops that it was an illegal assault on the constitutional process.
“The violent riot… was as direct assault on the US Congress, the Capitol building, and our Constitutional process,” said a memorandum signed by all eight members of the Joint Chiefs of Staff, led by the chairman, General Mark Milley, reports AFP.

“The rights of freedom of speech and assembly do not give anyone the right to resort to violence, sedition and insurrection,” they said.

The letter said members of the armed services are bound to defend the constitution.

“Any act to disrupt the constitutional process is not only against our traditions, values and oath; it is against the law.”

The message came amid concerns that the Trump-supporting extremists who raided the Congress to halt the certification of Joe Biden as the next president have supporters in the armed forces and law enforcement.

Trump and his supporters have refused to accept that Biden fairly and soundly won the November 3 presidential election.

The Pentagon is deploying as many as 15,000 National Guard troops to protect Biden’s inauguration on January 20, amid fears of new violence.

Pentagon officials were asked Monday about the possibility of pro-Trump activists in the Guard and among regular troops.

Underscoring the point, the Joint Chiefs said that, “in accordance with the Constitution,” Biden would be inaugurated on January 20th “and will become our 46th commander in chief.”

In South Korea, the commander of US Forces Korea, General Robert Abrams, retweeted the JCS statement saying there was “no ambiguity” the events at the Capitol were an “attempted insurrection”.

“If you are serving in uniform and think it was something else, I would encourage (you) to sit down and read the constitution that you swore an oath to support and defend,” wrote Abrams, who uses the handle @DogFaceSoldier.

“No room on our team if you are not willing to defend the constitution against all enemies, foreign AND domestic.”