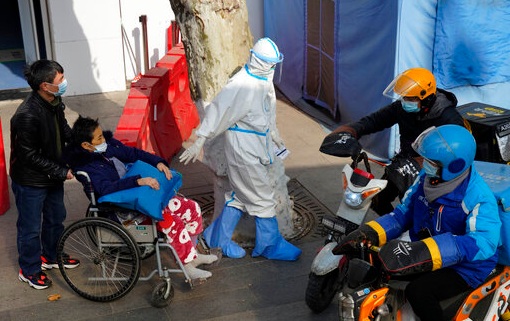 Online desk ; A city in northern China is building a 3,000-unit quarantine facility to deal with an anticipated overflow of patients as COVID-19 cases rise ahead of the annual Lunar New Year travel rush, reports The Associated Press.
State media on Friday showed crews levelling earth, pouring concrete and assembling prefabricated rooms in farmland in an outlying part of Shijiazhuang, the provincial capital of Hebei province, which has seen the bulk of the new cases.
That recalled scenes from early last year, when China rapidly built field hospitals and turned gymnasiums into isolation centres to cope with a then-spiraling outbreak in Wuhan, where the virus was first detected in late 2019.

The spike in northern China comes as a World Health Organization team prepares to collect data on the origin of the pandemic in Wuhan, which lies to the south. The international team, most of which arrived Thursday, must undergo two weeks of quarantine before it can begin field visits.

Two of the 15 members were held up in Singapore over their health status. One, a British national, was approved for travel Friday after testing negative for the coronavirus, while the second, a Sudanese citizen from Qatar, again tested positive, the Chinese Foreign Ministry said.

China has largely contained domestic spread of the virus, but the recent spike has raised concern due to the proximity to the capital, Beijing, and the impending rush of people planning to travel large distances to rejoin their families for the Lunar New Year, the country’s most important traditional festival.

The National Health Commission said Friday that 1,001 patients were under care for the disease, 26 in serious condition. It said 144 new cases were recorded over the past 24 hours. Hebei accounted for 90 of the new cases, while Heilongjiang province farther north reported 43.

Local transmissions also occurred in the southern Guangxi region and the northern province of Shaanxi, illustrating the virus’s ability to move through the vast country of 1.4 billion people despite quarantines, travel restrictions and electronic monitoring.