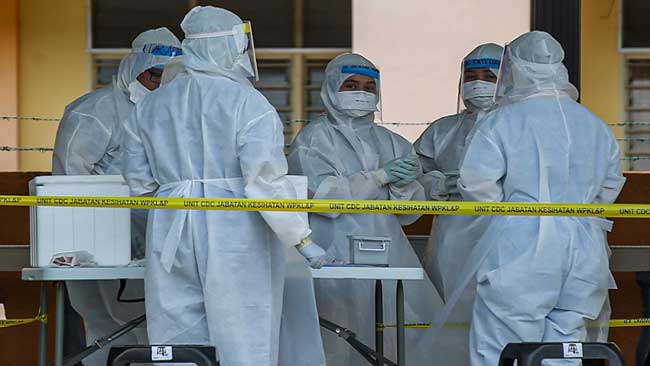 Online desk ; The confirmed cases of coronavirus globally surpassed 94.4 million with over 2.02 million deaths till Sunday morning, according to data compiled by Johns Hopkins University (JHU).

The US remained the worst-hit country, with 395,650 deaths and 23,743,788 cases, reports UNB. In late 2020, the coronavirus pandemic entered its deadliest phase yet in the United States, according to an Associated Press (AP) report.

The number of daily confirmed cases continued to race out of control, rising above 200,000 and then creeping closer to 300,000. Daily deaths sometimes surpassed 4,000. By mid-January, the total American death toll had crossed 375,000, with no immediate improvement in sight.

Cities and states sought to scale up their vaccination operations, opening centers designed to inoculate thousands of people a day in a single location. Some of the sites offered drive-thru injections. In New York City, the centers were scheduled to be open around the clock, the AP report says.

The pandemic, which had been tamed in some places over the summer, came roaring back in the final months of last year.

Brazil registered 1,050 deaths from Covid-19 in the last 24 hours, bringing the death toll to 209,296, its Ministry of Health reported on Saturday.

Hospitals in Manaus, the capital of the state of Amazonas, are overwhelmed. Since Thursday, they have reported a shortage of oxygen tanks. Family members of patients have had to take to the streets in search of oxygen.

As per the latest data, the daily infection rate dropped to 4.73 percent.

The country’s Covid-19 caseload stood at 527,063 with 578 new cases during the period. The fatality rate now stands at 1.49 percent, according to the Directorate General of Health Services.

The country’s infection number reached the 500,000-mark on December 20. The first cases were reported on March 8. The death toll exceeded 7,000 on December 12.

On January 7, the government approved the emergency use of the Oxford-AstraZeneca Covid-19 vaccine.

The approval will allow Beximco Pharmaceuticals to bring doses from the Serum Institute of India, which is manufacturing the vaccine, Mohammad Salahuddin, deputy director of the Directorate General of Drug Administration (DGDA), said.

Under the deal, Bangladesh will import 3 crore doses of SARS-Cov-2 AZD 1222 (Oxford-Astrazeneca vaccine) from Serum in the next six months. “If everything goes well, we’ll get the vaccines in mid-January,” Health Minister Zahid Maleques said.

On December 28, Bangladeshi pharmaceutical company Globe Biotech got approval from the DGDA for manufacturing Covid-19 vaccine for clinical trials.

“Hopefully, we’ll be able to begin clinical trials in January. It’ll take five months to finish. The vaccine will be available by June if we can begin the clinical trials this month.”

Bangladesh approved the emergency use of Oxford-AstraZeneca Covid-19 vaccine on January 7.

This will allow Beximco Pharmaceuticals to bring doses from the Serum Institute of India Pvt Ltd, which is manufacturing the vaccine.

The government signed an agreement with Serum Institute on December 13 for procuring the Oxford-AstraZeneca vaccine.

Under the deal, Bangladesh will import 30 million doses of the vaccine in the next six months.