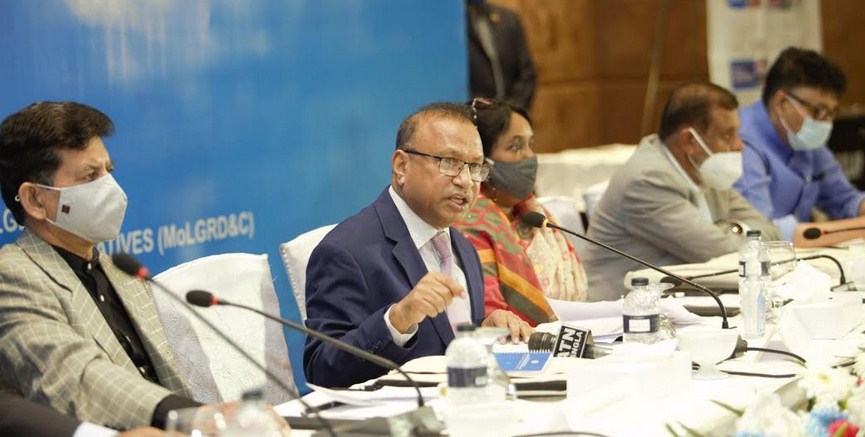 Online desk ; Local Government, Rural Development and Cooperatives Minister Md Tajul Islam on Sunday said the municipal councils must focus on increasing income or face dissolution as the government plans to change the law to this end.
“City corporations and Paurashava follow their own laws. They must take responsibility for generating and increasing their revenue as per their laws. If they fail to pay the salary of their staff for 12 months, we are planning for their dissolution,” he said.

“This is not believable that the inhabitants of paurashava cannot pay tax,” Tajul said while addressing a National Policy Dialogue on ‘Strengthening the Urban Local Governments in Bangladesh’ at a city hotel here, a UNDP release said.

Robert Chatterton Dickson said: “Bangladesh’s progress in recent years in poverty eradication and several human development fronts is remarkable, although sustaining progress has proved more difficult in the urban context in recent years. Addressing urban poverty and marginalisation is therefore a top priority for FCDO to ensure that no one is left behind.”

He said: “We are happy to see local government, citizens’ platforms, local businesses and private sector partners working together to address locally-specific vulnerabilities due to poverty and climate change.”

The British envoy said empowering urban local governments is important to achieving the Sustainable Development Goals, and “we aim to support continued collaboration on this”.

Sudipto Mukerjee said many of the challenges in eradicating urban poverty have remained unaddressed in Bangladesh and that is why it needs serious investments in urban social protection.

Bangladesh is yet to finalise its national urban policy, he said.

Before the COVID-19 pandemic, only about 18 percent of urban households were covered by social protection according to World Bank.

“With a prolonged crisis that has resulted in a significant rise in urban poverty, cities will require greater social protection coverage specifically targeting the newly created – as well as the previously existing – urban poor,” Sudipto said.

He added that the LIUPC project has been playing a considerable role as tried and tested model for urban social protection which can be considered for scale-up by the government.

City corporations and municipalities of the Local Government Division are responsible for delivering the basic urban services to the citizens. But they face tremendous challenges to tackle the urban poverty for lack of resources and capacity. The LIUPC project commissioned a series of research works in 11 city corporations and paurashava to identify their institutional and financial capacity gaps and make recommendations to overcoming the gaps.