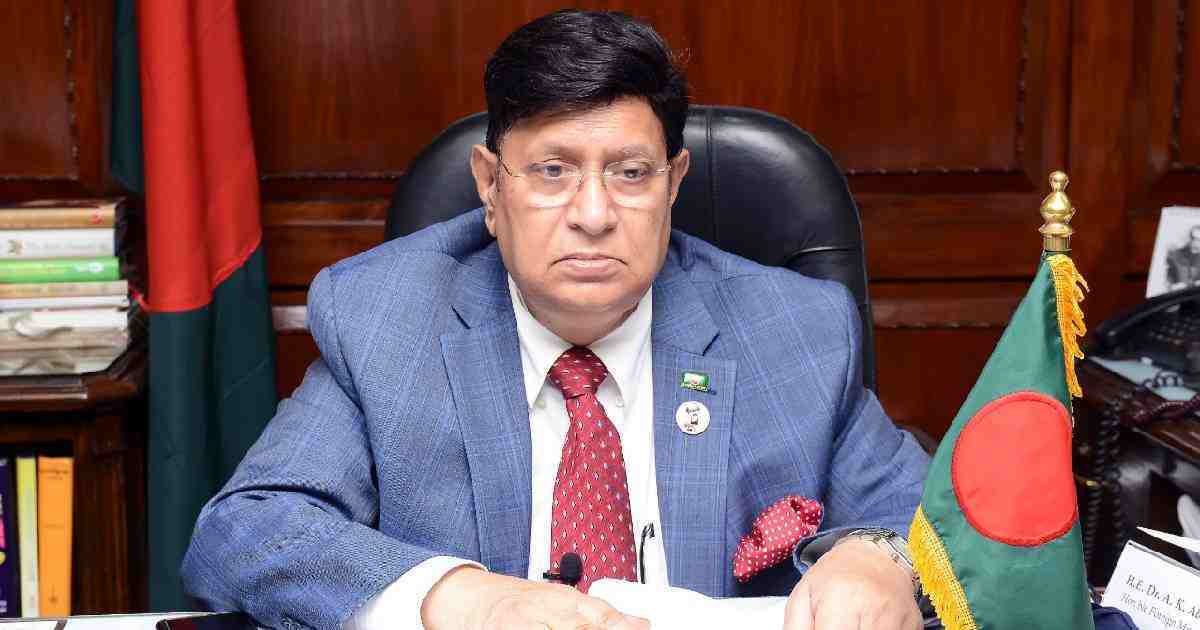 Online Desk ; Foreign Minister Dr AK Abdul Momen on Monday said the number of climate refugees is increasing and put emphasis on ensuring climate justice for all countries and their people.

“We’ve very practical experience of such a scenario having 1.1 million Rohingyas in Bangladesh creating environmental and social havoc,” he said at the inaugural session of Global Gobeshona Conference held virtually.

Dr Momen said Bangladesh has significant experience in locally-led adaptation initiatives which it wants to share with rest of the world.

“Our people, who are on the frontline of climate change, are very innovative in developing adaptation solutions,” he said.

The Foreign Minister said lack of resources and effective financial mechanism often prevent local actors to design essential local adaptation measures and deliver the plan. “The covid-19 pandemic has once again proven this.”

As the host GCA South Asia office, Dr Momen said they are planning to establish a “Center of Excellence on Locally led Adaptation” to promote South-South and North-South knowledge sharing and capacity building in Bangladesh.

At last year’s Gobeshona Conference, Ban Ki-moon, the former Secretary General of the United Nations and also the Chair of the Global Commission on Adaptation, launched the Locally Led Adaptation Action Track from the GCA.

“We’re glad to have him with us again this year to launch the new ten year journey to promote locally led adaptation from Bangladesh,” Dr Momen said.

He thanked the International Center for Climate Change and Development (ICCCAD) and said the 7th annual Gobeshona Global Conference provides an opportunity to share knowledge and practical experience on climate change issues, in particular on Locally Led Adaptation.

The Global Centre on Adaptation is also co-organising this event.

Dr Momen said although Bangladesh has negligible contribution to global warming, it is one of the most vulnerable countries due to its limited coping capacities and specific geographical features.

Considering global high risks, the leadership of national parliament adopted with consensus a resolution and called it a “Planetary Emergency” and urged the leadership of the world to work “on a war footing’’ to manage the negative impact of the climate change, he said.

Dr Momen said there is a limit to adaptation and unless the responsible states adopt and implement required mitigation measures, they cannot eternally continue adaptation measures.

Bangladesh has been highly applauded by the global community for her home-based excellent adaptation activities to enhance climate resilience.

Bangladesh and the leadership of Prime Minister Sheikh Hasina had been honoured to be chosen to lead the Climate Vulnerable Forum for the second term, Dr Momen said.

“We’ve also established the regional office of Global Centre on Adaptation for South Asia in Dhaka. This year we’re planting 11.5 million trees across the nation marking the ‘Mujib Borsho’, the birth centenary of our Father of the Nation Bangabandhu Sheikh Mujibur Rahman.”

He said they have also launched ‘Mujib Climate Prosperity Plan’ to mobilise resources for a secured future and our Prime Minister has announced a ‘Midnight Initiative’ to call upon the leading countries responsible for climate change to strictly adopt and implement enhanced NDCs.

As the host of the GCA South Asia office, Dr Momen said they firmly believe that empowering local actors and community is the best way to bring most effective solutions for the vulnerable people.

“Local actors have that knowledge and experience which are critical to take forward the adaptation activities. In order to make the adaptation actions more effective, effortless and sustainable, we need to engage local people, in particular the local youths.”

There will be 90 different sessions over the next seven days of the Gobeshona Global Conference and look forward to meaningful outcome of the conference.