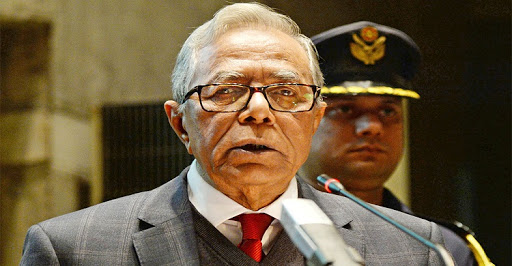 Online desk ; President M Abdul Hamid on Monday urged all to work unitedly irrespective of opinions and party affiliations to build a ‘Sonar Bangla’ by combating corruption, drug abuse, terrorism and militancy from the country as he addressed the maiden Jatiya Sangsad session of 2021.

“We have to work more unitedly to combat corruption, drug abuse, terrorism and militancy by upholding the Liberation War spirit to build the ‘Sonar Bangla (Golden Bengal)’ earlier dreamt by Father of the Nation Bangabandhu Sheikh Mujibur Rahman,” he told the House this afternoon.

President Hamid called upon all irrespective of religion, caste and tribe to forget the differences of party-opinion-path to pay the blood-debt of millions of martyrs by establishing an exploitation-free society.

As per parliamentary practice here, the current session, the 11th one of the Eleventh Jatiya Sangsad, is the maiden one of 2021 where the President addresses the House every year. Subsequently, a detailed discussion usually takes place in participation of lawmakers.

But due to COVID-19 this session, like the special JS session on the occasion of Mujb Borsho, will be held in a limited scale maintaining the health rules.

Leader of the House and Prime Minister Sheikh Hasina and parliamentarians of both treasury and opposition benches were present as Speaker Dr Shirin Sharmin Chaudhury chaired the sitting.

Abdul Hamid said, “Despite hundreds of adversities to accelerate the progress of the country and the nation, the government continues to make its relentless efforts to ensure good governance, democracy and people’s participation in development programmes.”

Terming the Jatiya Sangsad as a focal-point of people’s hopes and aspirations of the country, he urged people of all political parties, classes and professions to take concerted efforts to build consensus on democratization, good governance and uninterrupted socio-economic development.”

The ruling party as well as the opposition has to play a constructive role in ensuring transparency, accountability, tolerance, consolidation of human rights and rule of law and progress of the nation, the President added.

The head of the state called upon the ruling party and the opposition to play their due role in the great Jatiya Sangsad.

President Hamid also lauded the efforts of the government to consolidate and uphold the rule of law in the country and curb terrorism and militancy.

Giving a salient feature of the incumbent government’s development goals, the President said some 24 mega projects are under implementation for the socio-economic development of the country.

Mentioning some mega-projects which are the incumbent government’s outstanding achievements he said construction of the Padma Bridge will be completed by July 2022 and as a result the southern part of the country will be attached with other regions of the country.

The President noted that the premier has earned different prestigious and international awards for her uncompromising and charismatic leadership for ensuring peace and security, development, democratic practice, good governance, eliminating terrorism, empowering women, developing and expanding education, health including immunization for children, and ICT sector and mitigating challenges caused by environmental changes.

The President told that the global lethal disease Coronavirus, like the rest of the world, had a negative impact on all sectors of the economy, including our economy, education, health, trade, employment, small and cottage industries.

But due to the time-befitting steps, in line with 31-point directives, of the government led by Prime Minister Sheikh Hasina, Bangladesh is coping with the Corona situation successfully, he added.

The President told the House that the name of PM Sheikh Hasina was included in the list of successful women leaders mentioned in the article titled ‘8 (More) Leaders Facing The Coronavirus Crisis’ published by the renowned magazine ‘Forbes’.

Bangladesh ranks the first in South Asia and 20th in the world in the ‘COVID-19 Tolerant Ranking’ compiled by the US business news agency Bloomberg for its successful response to the COVID-19 pandemic, economic revival and mintaing the quality of life, he pointed out.

‘Due to this, Bangladesh’s image has become brighter across teh globe and I sincerely thank and appreciate the premier for it,” Abdul Hamid lauded.

The President said, “The process of direct purchase of three crore doses of vaccine has been finalized with Beximco Pharmaceuticals Limited and Serum Institute of Life Sciences Pvt Ltd of India to combat the COVID-19 epidemic. I hope the government will soon be able to vaccinate the people of the country”.

The head of the state said the government is working to maintain stability in the country’s financial sector, protect the money deposited by the people, create opportunities for short-and-long-term investments and facilitate financial transactions.

On the occasion of Mujib Year, ‘Bangabandhu Youth Loan’ programme is being implemented by Karmasangsthan Bank for two lakh trained unemployed youths, he said, while the interest rate on bank loans brought down to nine percent to create an industry and business friendly environment.

The President informed the House that after achieving an average growth of 6.6 percent in the last one decade and above seven percent for last three consecutive years, Bangladesh’s GDP growth has increased to 8.15 percent in the 2018-19 fiscal year. “This continuous achievement of Bangladesh’s growth has been praised worldwide.”

“The average life expectancy has increased to 72.6 years and the education rate is 74.7 percent at present. The infant mortality under the age of five and maternal mortality rate has come down from 41 and 1.97 per thousand in 2013, while it was 29 and 1.65 percent in 2019.

He said in the novel Coronavirus epidemic, despite Bangladesh’s GDP growth has slightly slowed down to 5.24 percent in the 2019-20 fiscal while the per capita national income has increased by 8.12 percent and stood to 2,064 US dollars.

Besides maintaining GDP growth, Hamid said it was possible to keep inflation at a tolerable level saying that the IMF reports said Bangladesh ranked third among the highest GDP growth countries in 2020.

Pointing out a salient picture of agricultural products he said Bangladesh got third position in rice and vegetable production, seventh in mango production, eighth in potato and guava production in the world by continuing the crop production trend even under the deadly COVID-19 outbreak.

Bangladesh today is self-sufficient in fish, meat and egg production while production and marketing activities of fish and animal products remained active, he added.

At the very outset of his address, the President paid tribute to Bangabandhu Sheikh Mujibur Rahman, the greatest Bengali of all time, all valiant freedom fighters and other patriotic souls who had to sacrifice their lives for the sake of the country and nation in different time.

With the aim of building the ‘Sonar Bangla’ as per Bangabandhu’s dream, President Hamid said the government has adopted a multi-dimensional action plan entitled ‘Vision-2041’.

“Today we are on the threshold of the golden jubilee of independence. We have to move forward on the path of peace, democracy, development and prosperity. This year, as a middle-income country, we will celebrate the ‘Golden Jubilee of Independence’” the veteran politician expected.

The President hoped that under the leadership of Prime Minister Sheikh Hasina, Bangladesh would be able to build a welfare, developed and prosperous Bangladesh with the full participation of the mass people.