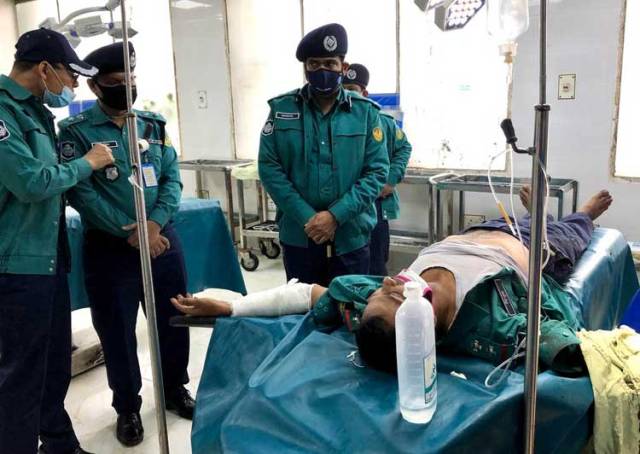 Online desk ; A traffic sergeant was physically assaulted allegedly by a motorcyclist in Rajshahi city on Tuesday afternoon. The incident occurred around 1pm in Bilshimla Oitijja Chattar in the city.
Injured policeman Bipul Kumar was admitted at Rajshahi Medical College Hospital. He received injuries in his two hands and different parts of the body, said Rajpara Police Station officer in-charge (OC) Majharul Islam.

Witnesses said as the biker could not show the document of the motorcycle, the policeman was recording a case against him. After that, he took the bike onto the footpath.

As the sergeant forbid him, they locked into an altercation.

At one stage, he brought a piece of wood from a nearby furniture shop and started to hit Bipul Kumar indiscriminately.

As the locals rushed to rescue him, he fled the spot, leaving the vehicle behind.

Police, however, detained two persons –one has a tea stall and another works in a furniture shop in the area— for questioning about the accused, said Golam Ruhul Quddus, spokesperson of Rajshahi Metropolitan Police.

The detained persons said the name of the accused is Belal, a resident of Laxmipur Bhatapara area in the city. He often gossip in the tea stall.