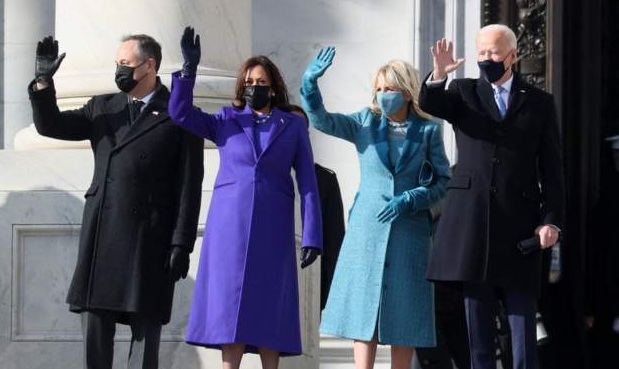 online desk : Joe Biden will swear the oath of office to become the 46th president of the United States, in an inauguration like no other before, report itvnews.com and BBC.
Wednesday’s Inauguration Day will be without the presence of the outgoing president for the first time in 152 years.

Joe Biden has arrived at the US Capitol in Washington, where he will be sworn in as 46th US president just before 17:00 GMT.

Vice-President-elect Kamala Harris will take the oath of office alongside him – the first woman to hold that position.

The pair started their day with a church service at the Cathedral of St Matthew in Washington.

And with Washington DC essentially in lockdown, the Presidential Inaugural Committee (PIC) announced virtual Inauguration Day events for Americans to watch after urging people to refrain from attending in person.

Some 25,000 troops will guard the inauguration ceremony after a deadly riot at the Capitol earlier this month.

Americans have been told to ‘stay home’ to prevent further spread of the coronavirus that has claimed more than 400,000 lives in the United States.The ceremony in which presidential power is transferred – a hallowed American democratic tradition – will serve as a reminder of the challenges Biden faces. The inauguration will unfold at a US Capitol battered by an insurrectionist siege just two weeks ago.

Ahead of the inauguration, Donald Trump departed the White House for the final time as US president, travelling to Florida to greet supporters instead of attending the inauguration.

Meanwhile, Joe Biden and his Vice-President, Kamala Harris, have a packed timetable ahead of them, including laying wreaths, giving speeches and enjoying performances by A-list celebrities.

In his first official acts as US president, Joe Biden is signing executives orders on a broad range of issues, from the coronavirus pandemic to climate change and immigration, to fulfil campaign promises and to undo the heart of Trump’s agenda. Biden will come to office with a well of empathy and resolve born by personal tragedy as well as a depth of experience forged from more than four decades in Washington. At age 78, he will be the oldest president inaugurated.