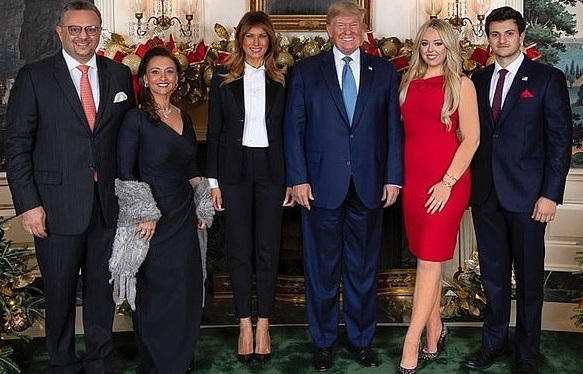 Online desk ; Outgoing US President Donald Trump’s youngest daughter Tiffany has announced her engagement with her “billionaire heir” boyfriend Michael Boulos.
Tiffany’s decision on one of the happiest moments of her life coincided with her father’s final full day in office.

74-year-old Donald Trump would be succeeded by 78-year-old Biden as the 46th President of the United States Thursday.

Taking to Instagram, 27-year-old Tiffany posted a photo with Michael and wrote: “It has been an honor to celebrate many milestones, historic occasions and create memories with my family here at the White House, none more special than my engagement to my amazing fiance Michael! Feeling blessed and excited for the next chapter!”

In the photo posted on Instagram, Tiffany was seen donning a black dress, with an engagement ring, and standing next to her 23-year-old “billionaire heir” fiance Michael Boulos in one of the White House colonnades.

Tiffany and Boulos have been dating since 2018. A law graduate, Tiffany is the only child of Trump and his second wife Marla Maples. Boulos, a business executive, is described as a “billionaire heir” by Vanity Fair. He is the son of a Lebanese expatriate and a multi-billion-dollar conglomerate based in Lagos.

Tiffany, primarily raised by her mother Maples in California, graduated from Georgetown Law School in May 2020. She kept away from the limelight as compared to her older siblings. It was only over the summer when she stepped into the political spotlight as she spoke at the Republican National Convention.

“Our generation is unified in facing the future in uncertain times — and many of us are considering what kind of country we want to live in.

As a recent graduate, I can relate to so many of you who might be looking for a job. My father built a thriving economy once, and believe me, he will do it again,” she said at the time, urging Americans to vote “based on results and not rhetoric”.