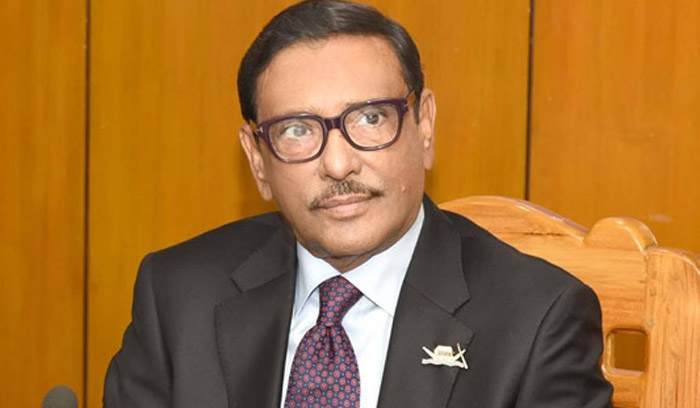 Online desk : Awami League General Secretary Obaidul Quader has warned that stern organisational action would be taken against the AL leaders who work against the party nominated candidates in the municipality elections.
“Rebel candidates and their supporters will not be spared. Strict organisational measures will be taken against any level of AL leaders and public representatives found working against AL candidates in the next phases of municipality elections,” he said.

Quader, also the road transport and bridges minister, was speaking at a discussion through videoconferencing from his official residence in Dhaka on Wednesday, reports BSS.

The AL sub-committee on labour and manpower organised the discussion at Awami League’s Central Office at the city’s Bangabandhu Avenue.

Quader said the initiatives taken under the humanitarian leadership of Prime Minister Sheikh Hasina to protect the helpless people during the coronavirus pandemic and natural disasters were lauded around the world.

He said: “The BNP leaders predicted that thousands of people would die on the streets without food and treatment. But, due to the far-sighted leadership of Sheikh Hasina and by the grace of Allah, such thing does not happen yet.”

When the government and the AL workers were busy to provide services for people, the BNP men hide their heads into sand like an ostrich, the AL general secretary said, adding “They are shamelessly saying now that the government has failed (in addressing COVID-19 crisis).”

He said BNP conducted a propaganda in advance over the COVID-19 vaccine as their politics is to make any work for the welfare of the country and its people questionable.
Corruption was institutionalised in the country’s every sector during the BNP era, but the present AL government has taken zero tolerance policy to graft and it does not hesitate to punish criminals, Quader said.

He said: “The government has successfully dealt with the COVID-19 consequences. And the Sheikh Hasina’s government will also complete the tasks of COVID-19 vaccine collection and its management and vaccination successfully, InshaAllah.”

About the wages of labourers, the road transport and bridges minister said effective measures have been taken to remove wage inequality between male and female workers.

He said the government is working to ensure minimum wages for workers, job security, workers’ welfare and their rights to trade union in line with the cost of living.

Quader informed that a meeting of the AL Nomination Board for the 5th phase of municipality elections will be held at Ganabhaban at 11 am on January 30 next with AL President Sheikh Hasina in the chair.