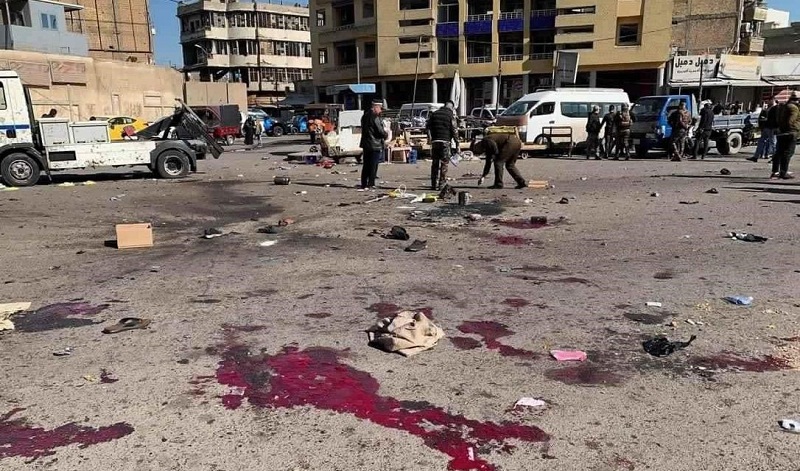 Blood smeared the floors of the busy market amid piles of clothes and shoes as survivors took stock of the disarray in the aftermath.

No one immediately took responsibility for the attack.

Iraq’s military said at least 28 people were killed and 73 wounded in the attack and said some of the injured were in serious condition.
Hospital and police officials said the death toll was actually much higher, with at least 27 dead and more than 60 wounded. They spoke on condition of anonymity because they were not authorized to brief the media.

Iraq’s Health Ministry announced all of its hospitals in the capital were mobilized to treat the wounded.

The attack occurred as security forces pursued two suicide bombers who detonated their explosives in the market near Tayaran Square, according to military spokesman Yahya Rasool.

No one immediately took responsibility for Thursday’s attack, but Iraq has seen assaults perpetrated by both the Islamic State group and militia groups in recent months.

Militias have routinely targeted the American presence in Iraq with rocket and mortar attacks, especially the U.S. Embassy in Baghdad’s heavily fortified Green Zone. The pace of those attacks, however, has decreased since an informal truce was declared by Iran-backed armed groups in October.

The style of Thursday’s assault was similar to those IS has conducted in the past. But the group has rarely been able to penetrate the capital since being dislodged by Iraqi forces and the U.S.-led coalition in 2017.