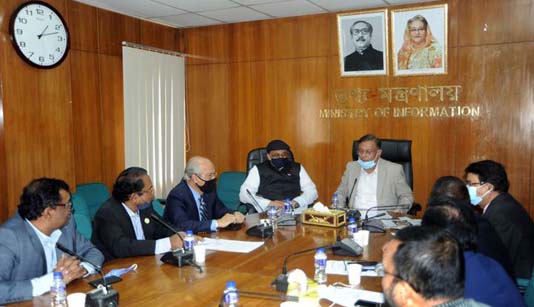 “The vaccine of COVID-19 has reached and the Indian government gave those as gift. For this, I would like to give thanks to the Indian government. But, BNP’s statement expressed their mentality that not being able to see any good of a disliked neighbour and always wishing for bad,” he said.

The minister told the reporters after exchanging views with the representatives of Bangladesh Sampadak Forum at the meeting room of his ministry at Secretariat in the capital.

Hasan said BNP hoped that the government could not be able to cope the coronavirus pandemic. But, Prime Minister Sheikh Hasina has handled the situation very efficiently and her leadership has been praised across the globe, he added.

The minister said Bangladesh’s position is third among the 22 countries which achieved positive GDP during the COVID-19 situation. And, as per a report of Bloomberg, the position of the country (Bangladesh) in combating coronavirus is in top in the Asia and 20th across the globe, he added.

On the other hand, he said, BNP was involved in looting in everything when they were in power and the country became champions in corruption for fourth times and one time with an African country as they looted through building ‘Hawa Bhaban’.

He said the premier was able to bring the coronavirus vaccine on time and it will be administrated at first to the frontline fighters with most caution. And thus the government is taking initiatives, said Hasan, also Awami League joint general secretary.

“I don’t know why BNP sees looting here. Those who think about looting always, they can say like that. Actually, they (BNP) become mad. For this, they are talking like mad, ” he added.

They also demanded to stop giving government advertisements and supplements to those newspapers which are not listed of DFP and those national dailies which are not distributed through two hawkers’ samities.

Besides, the forum demanded to take initiatives of amending the system of determining the number of the newspapers and to form a committee to supervise the system to pay the dues of government advertisements between three months, decentralization of advertisement management and to include forum representatives in different committees of the information ministry.

They also demanded to scrutinize the experienced certificate of 15 years of editor and minimum education qualification of honours before giving declaration of a newspaper.

The information minister said there are many self-educated journalists in the country without institutional certificate who have ability to be an editor and it is considerable. Other demands would be examined, he said.