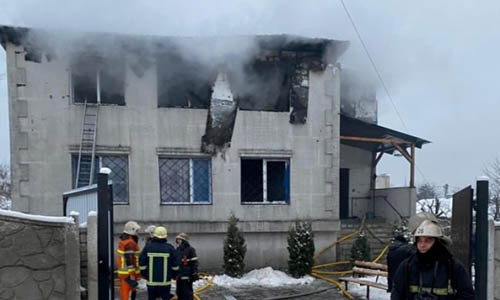 Online desk ; At least 15 people were killed and five others injured in a fire at a private nursing home in Kharkiv, Ukraine, authorities said.

According to the press service of Ukrainian State Service for Emergencies, the fire broke out at 3.03 p.m. on Thursday and quickly engulfed an area of about 100 square metres, reports Xinhua news agency.

After about two hours, the fire was extinguished.

Fifty employees of the State Emergency Service and 13 pieces of equipment were involved in the fight against the fire.

The bodies of 15 people were found at the scene of the tragedy. Nine more people were rescued, five of whom were hospitalised. The state of the victims has not yet been reported.

President Volodymyr Zelensky called the incident a terrible tragedy and instructed the Cabinet of Ministers to urgently address the situation.

The preliminary cause of the fire is the violation of the safety regulations, according to Prosecutor General Irina Venediktova.

Prime Minister Denys Shmyhal called for an extraordinary governmental meeting to set up a state commission to investigate the cause of the tragedy. The fire was classified as a state-level emergency.