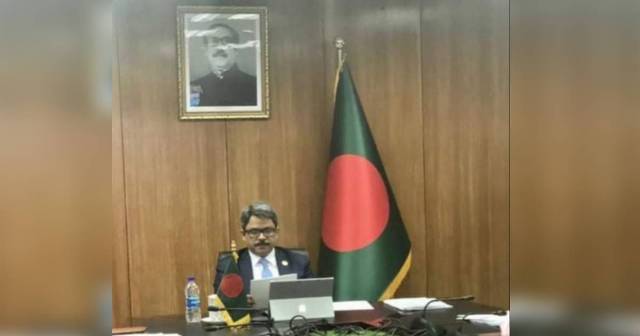 Online desk ; State Minister for Foreign Affairs M Shahriar Alam has expressed hope that an effective and safe vaccine against COVID-19 will be equally accessible globally which can help the world to return to the “new normal”.
He welcomed the initiative of the World Health Organization (WHO) to designate 2021 as the International Year of Health and Care Workers (YHCW) at the 73rd World Health Assembly.

Shahriar urged the Asia Cooperation Dialogue (ACD) Member States to strengthen world trade by establishing a sustainable and stable supply chain with the support of the World Trade Organisation.

He made the remarks at the 17th Ministerial Meeting of the Asia Cooperation Dialogue (ACD) held virtually on Thursday chaired by Turkish Foreign Minister Mevlut Cavusoglu. Ministers of the ACD Member States also spoke.

“Bangladesh is keen to provide all possible assistance to strengthen the ACD secretariat as well as to appoint diplomats in the future,” he said.

The State Minister sought cooperation from the international community to resolve the Rohingya crisis, noting that the solution lies in repatriation of Rohingyas.

“We’re still grappling to arrange accommodation for around 1.1 million forcibly displaced Rohingya people. Bangladesh expressed her deep political will and sincere commitment to settle Rohingya crisis through bilateral and multilateral approach,” he said.

Shahriar said two centuries ago, the world abolished slavery by the power of humanity.

“We also pledged that genocide will happen “never again” in the world. So, it’ll only require our true willingness to stop all kinds of misanthropic activities such as terrorism, genocide and all sorts of violence.”

Shahriar said Bangladesh has a host of natural treasures such as beaches, lakes, rivers, hills and forests that offer significant value for tourist attractions.

He said the Chittagong Hill Tracts with its scenic waterfalls and green hills, the world’s longest uninterrupted sandy Cox’s Bazar sea beach and Sundarbans, the largest mangrove forest, are the most popular tourist attractions in Bangladesh.

Unfortunately, according to a report, the total loss of tourism sector of Bangladesh is around $2,000 million at the end of 2020 due to the COVID-19 pandemic, said the State Minister.

The government has made special allocation in the budget of FY 2020-21 to recover the losses of the tourism sector, he said.

During winter, Bangladesh becomes a charming place for migratory birds.

“Mainly, plenty of habitats for migratory and seasonal birds have made our country a paradise for ornithologists and nature lovers. Obviously, these geographical facts and features have established Bangladesh as a desirable destination for tourists around the world,” he said.

Bangladesh is also rich in handicrafts and readymade apparel industry.

For example, he said, Jamdani, a flagship of Bangladeshi traditional handicraft, was recognised as intangible cultural heritage by UNESCO in 2013 due to its special characteristics, quality and reputation. Jamdani is one of the surviving ancient patterns of legendary Muslin.

“There’s a saying that the Muslin woven in Bangladesh is so soft and fine that six yards of the fabric could pass through a single ring of the index finger! During the 18th century, Muslin was highly popular in Europe and the Middle East,” said the State Minister.