Indian farmers to step up protests 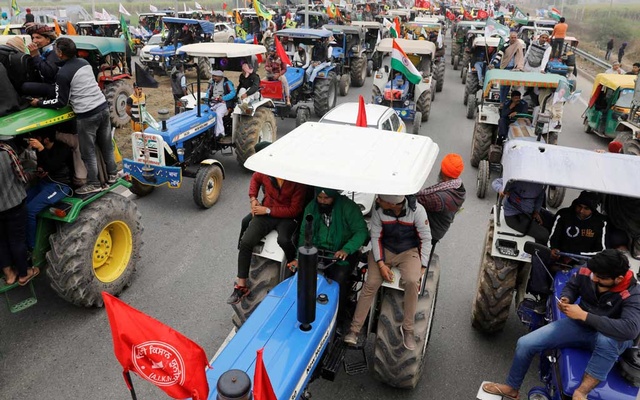 Online desk ; Indian farmers on Friday rejected an offer by the government to defer three farm reform laws for one-and-half years, warning they would step up protests as they seek a repeal of the laws and a guarantee on minimum crop prices.

Farm leaders said hundreds of thousands of farmers from neighbouring states including Haryana, Punjab and western Uttar Pradesh would drive tractors through New Delhi on January 26, the Republic Day national holiday when Prime Minister Narendra Modi will join a parade of military forces.

Although some former government officials have expressed concern that the protests could turn violent, the leaders said they would remain peaceful and urged the police to grant permission for the convoy to enter the capital.

The 11th round of talks between government officials led by Agricultural minister Narendra Singh Tomar and forty farm leaders earlier on Friday was inconclusive. Farmers stuck to their demands while the government urged them to consider its offer to hold discussions to address their concerns after deferring the laws.

“There is a sort of deadlock as the government repeated the offer of deferring the laws, which is not acceptable,” Darshan Pal, one of the farm leaders told reporters after the meeting.

Modi’s government has said that the laws introduced in September will unshackle farmers from the obligation of selling produce only at regulated wholesale markets. But the farmers say the bills are designed to benefit private buyers.

Tomar said the government was committed to the reforms.

“If (farm leaders) agree with our proposal, we can meet tomorrow,” he said.

Hundreds of thousands of farmers have been camping on the outskirts of national capital for nearly two months, blocking some of the roads connecting New Delhi with neighbouring states.

Supporting the farmers, the main opposition Congress party said on Friday that the government had shown “shocking insensitivity and arrogance” towards farmers and urged it to accept their demands.