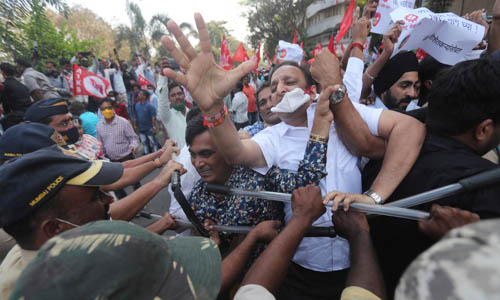 Online desk ; Tens of thousands of farmers massed on tractors outside the Indian capital as the nation celebrated Republic Day on Tuesday in the backdrop of agricultural protests that have grown into a rebellion and rattled the government.
The tractor rally overshadowed the Republic Day celebrations in New Delhi even as the annual military parade was scaled down because of the pandemic, reports AP.

A thin crowd assembled beside the ceremonial Rajpath boulevard in New Delhi to watch a display of the country’s military power and cultural diversity. People wore masks and adhered to social distancing as police and military battalions marched along the parade route. Several states displayed their floats to present their culture and the army showcased its latest equipment during the parade.

Republic Day marks the anniversary of the adoption of the country’s constitution on Jan. 26, 1950. Meanwhile, thousands of tractors, decorated with Indian and farm union flags, lined up on the outskirts of New Delhi, ready to swarm the Indian capital.

Heavy contingents of police in riot gear patrolled the routes farmers were to take during the rally. “We want to show Modi our strength,” said Satpal Singh, a farmer.

The protests were set off by new agricultural laws Parliament passed in September. Prime Minister Narendra Modi’s government insists the laws will benefit farmers and boost production through private investment, but farmers fear cartelization and commercialization of agriculture will devastate their earnings.

Farmers first tried to march to New Delhi in November but were stopped by police. Since then, unfazed by overnight chilly winter temperatures they have hunkered down with food and fuel supplies and threatened to besiege the capital until the farm laws are repealed.

The government has offered to amend the laws and suspend their implementation for 18 months. But farmers insist they will settle for nothing less than a complete repeal.