One killed as protestors breach Red Fort during Delhi march 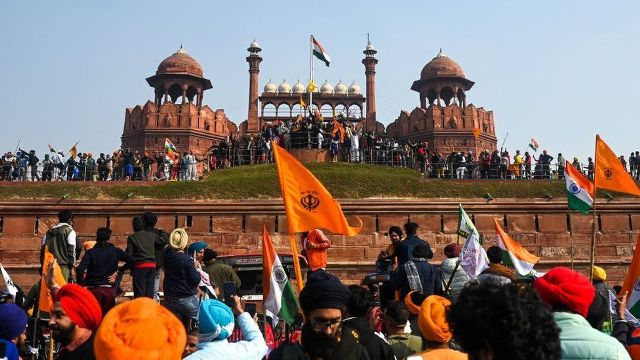 Online desk ; Thousands of farmers protesting at agriculture reforms have fought through police barricades and tear gas to enter Delhi’s historic Red Fort complex.
They are on foot and in tractors – part of a massive rally that was planned to coincide with India’s Republic Day, BBC reports.

Many protesters diverted from agreed routes and clashes broke out with police. One protester has died.

The government says the reforms will liberalise the agriculture sector but farmers say they will lose income.

Tens of thousands of them have been striking on the outskirts of Delhi since November, demanding the laws be repealed. They rejected a government offer to put the laws on hold last week.

This is one of the longest farmers-led protests India has ever seen, pitting the community against Indian Prime Minister Narendra Modi and his Bharatiya Janata Party-led (BJP) government.

Police agreed to allow Tuesday’s rally after several rounds of talks on the condition that it would not interrupt the annual Republic Day parade, which takes place in central Delhi. They gave farmers specific routes for their rally, which would largely be confined to the outskirts.

But farmers instead converged on the iconic 16th Century fortress. They breached security and clambered onto the walls and domes of the fort, even hoisting flags alongside the national flag.

While farmers at several entry points appear to have followed the agreed routes, a section of protesters at the Ghazipur, Sinnghu and Tikri borders, three of the six main entry points to the city, broke through police barricades earlier in the day

Those at Ghazipur started marching towards central Delhi, where India’s parliament is located.