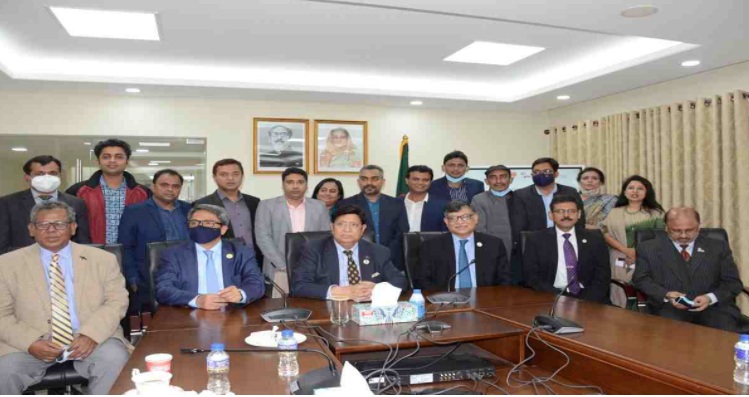 Online Desk ; Foreign Minister Dr AK Abdul Momen on Wednesday sought support from the media to achieve Bangladesh’s foreign policy goal on public diplomacy front to help the country tell its success stories abroad, reports UNB.
“We want your deep engagement. It’s time for a change,” he said highlighting the importance of objective journalism instead of focusing only on negative aspects.

Appreciating the role of media, the Foreign Minister also encouraged the journalists to give a comparative understanding on issues like incidents of rape and extrajudicial killings instead of giving one-sided picture.

He made the remarks when Diplomatic Correspondents Association, Bangladesh (DCAB) Executive Committee led by its President Pantho Rahaman and General Secretary AKM Moinuddin met him.

The Foreign Minister said what they see about Bangladesh in media in some cases is not the real picture.

Congratulating the DCAB leaders, State Minister Alam said the Ministry of Foreign Affairs will help the DCAB members in terms of capacity building through the Foreign Service Academy.
He appreciated the proposals made by the DCAB and suggested to come up with in a written format to proceed on the proposals.

“We’ve many things to do. And we’ll be able to do it,” said the State Minister.

Foreign Secretary Masud Momen said all the proposals made by the DCAB are deliverable. “We’re on the same page.”

DG and Director of the Public Diplomacy wing shared their plans in the meeting on how they can collaborate more to promote public diplomacy.