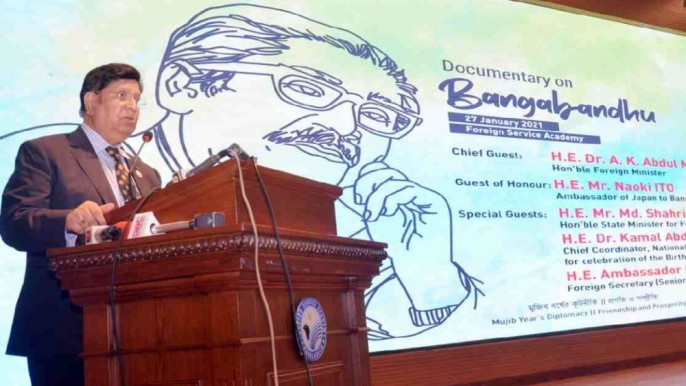 Online desk : Foreign Minister Dr AK Abdul Momen on Wednesday described Dhaka-Tokyo relationship as “rock solid,” noting that Japan came out to help Bangladesh without reservation, reports UNB.
“Bangladesh is considered as a development miracle to the rest of the world. We’re no longer a basket case but a land of opportunity, a vibrant economy,” he said.

The Foreign Minister made remarks on the occasion of the screening of documentary titled ‘Bengal no Chichi Lama’ (The Father of Bangladesh) organised by the Ministry of Foreign Affairs at the Foreign Service Academy.

Dr Momen said Father of the Nation Bangabandhu Sheikh Mujibur Rahman inherited a country with nothing but scorched earth.

Under the very able and visionary leadership of Prime Minister Sheikh Hasina, he said, Bangladesh has come a very long way since independence and is now on a development trajectory.

“We’re lucky to have a visionary leader like Bangabandhu and a statesman like Prime Minister Sheikh Hasina. In this Mujib Borsho, I’m pleased that we could have a documentary on Bangabandhu in Japanese language for easy understanding of our friends of Japan,” he said.

The rare documentary was made on the life of Bangladesh’s founding father by Japanese Director Nagisa Oshima.

Foreign Minister Momen thanked Ambassador Naoki for his support in this regard.

“It’s truly our lifetime opportunity that we’re being able to be a part of the celebration process of the birth centenary of the Father of the Nation together with the golden jubilee of the independence of Bangladesh,” Dr Momen said.

Under the “prudent guidance” of Prime Minister Sheikh Hasina, National Committee and the National Implementation Committee have been involved in the whole celebration process since the beginning of Mujib Borsho in 2019, he said.

The Ministry of Foreign Affairs along with all the Bangladesh Missions abroad have joined in the celebration process across the globe with a view to disseminating the glorious history of Bangabandhu and Bangladesh.

Except Nelson Mandela there is no other leader who suffered imprisonment for years to establish justice, end disparity, discrimination, deprivation and promote and establish democracy, Dr Momen said.