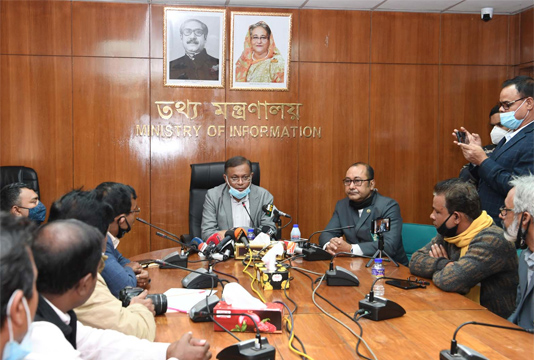 Online desk ; Information Minister Dr Hasan Mahmud on Thursday said BNP gave up hopes at the end of the Chattogram City Corporation (CCC) polls and were sitting at home though the party took part in the polls and unleashed violence on the day.

“BNP carried out attacks in different places, damaged EVMs and injured many persons, including the son of Awami League city unit publicity secretary, on the polls day. In another incident, a brother killed his sibling, but BNP was not in the field to make the polls competitive,” he said.

The minister told newsmen after exchanging views with the newly elected executive committee members of Bangladesh Photo Journalists Association (BPJA) at the meeting room of his ministry at the secretariat.

Hasan, also Awami League joint general secretary, said the allegations of BNP are stereotyping and to cover up their shame. Actually, when no one knows how to dance, they say that the yard is crooked and BNP is also saying like that, he added.

He said many polls agents of BNP didn’t go in many centers, but they (BNP) have raised an allegation that their agents were ousted during the election. “If the agents didn’t go in the centers then how they will be ousted?” he posed a question.

The minister said some untoward incidents took place in the local government elections in the country which was also held at different states including in West Bengal of the neighboring India. Even, 19 persons were killed during the Kolkata City Corporation and Panchayet polls in 2018, said Hasan.

The minister said electoral meeting of BJP candidate Rupa Ganguly was attacked during Kolkata city polls and she (Rupa) took shelter in a house. But no such incident happened in the polls here, he added.

About the low voter turnout, he said, it was due to the prevailing COVID 19 situation and it was not appropriate for hopping the presence of huge voters in this situation. In fact, BNP didn’t win the Chattogram City Corporation (CCC) polls after 1994, he added.

Hasan said BNP nominated Manjurul Alam Manju won the CCC polls in 2010 which was without party symbol and he (Manju) went there to play as ‘hire player’.

He said Manju did politics of AL in his whole life and he formed a foundation after the name of Bangamata and run a school. For this, many activists of AL worked in favour of him in that polls, he added.

In reality, the minister said, they (BNP) didn’t get victory after 1994, and even no councilor nominated by the party gets victory this time.

About the nature of photo journalists’ tasks, the minister said perfection comes when pictures are added to the news. The way photographers capture an event or moments of life is an extraordinary evidence of times, he added.

Many pictures taken by photographers during the liberation war, independence movement or the partition earlier have become timeless, said Hasan.