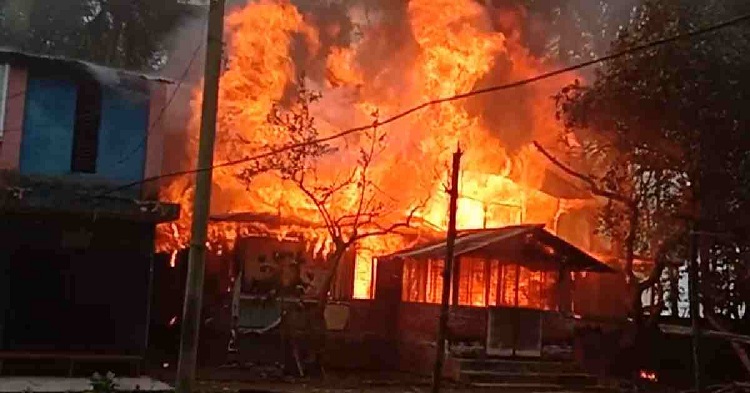 Online desk ; The house of Lieutenant Commander Mozzem Hossain, the number two accused in the historic Agartala Conspiracy Case, was destroyed in a massive fire in Pirojpur on Friday.

By the time the Fire Service and Civil Defence members contained the fire, the house was completely destroyed, said Station Officer Abu Zafar.

The house is located in the Sadar Upazila’s West Dumritala neighbourhood.

“We contacted the fire service immediately as the locals tried to put out the blaze. There was nothing left by the time the fire was extinguished,” he said.

Tunu claimed the estimated loss was about Tk 4 million.

“The most important issue is that this is the house he was born in. And now it has been destroyed,” he said, demanding to preserve his brother’s memories.

Station Officer Zafar said three firefighting units to contain the fire and that there was no casualty since the house was empty.

“We initially suspect that an electric short-circuit sparked the fire,” he said. “The actual cause will be known after a thorough investigation.”

Moazzem Hossain was a Lieutenant Commander of the then Pakistan Navy. He was made the number 2 accused in the Agartala Conspiracy Case along with Bangabandhu Sheikh Mujibur Rahman.

A team of Pakistani army, led by 32 Punjab Colonel Taz, raided his Dhaka residence on the morning of March 26, 1971, and shot him dead.

The government bestowed on him the ‘Swadhinata Padak’, the country’s highest civilian award, in 2012 for his role in the Liberation War.