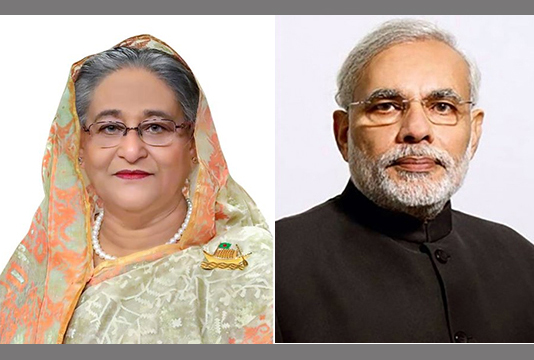 Online Desk : Prime Minister Sheikh Hasina and her Indian counterpart Narendra Modi are likely to have a Summit meeting in Dhaka on March 27, taking forward the relations between the two countries with the celebratory year in focus.

Bangladesh is ready to welcome Prime Minister Modi on March 26 to celebrate 50 years of Bangladesh’s independence together, reports UNB.

Bangladesh and India will hold four Secretary-level meetings before the Summit meeting between the two Prime Ministers to give inputs for the March-27 talks.

The two countries are currently working on four to five MoUs to be signed during the Summit meeting and there is a possibility to increase the number of bilateral documents with inputs from four Secretary-level meetings.

Foreign Secretary Masud Bin Momen shared the plans during a briefing at the Ministry of Foreign Affairs on Sunday afternoon on his New Delhi visit.

He said Indian Foreign Minister Dr Jaishankar is likely to visit Bangladesh before the visit of Prime Minister Narendra Modi.

Earlier in December-17 virtual meeting, Prime Minister Sheikh Hasina thanked her Indian counterpart for accepting her invitation to visit Bangladesh in person in March 2021 to join the celebrations on the occasion of 50th anniversary of Bangladesh’s Independence and 50 years of Bangladesh-India diplomatic relations.

Bangladesh and India described the year 2021 as historic in their bilateral relations as they would be commemorating the fiftieth anniversary of the Liberation War and the establishment of diplomatic relations between India and Bangladesh.

Bangladesh Prime Minister requested the Indian side to consider Bangladesh’s proposal to name the historic road from Mujib Nagar to Nodia on Bangladesh-India border as “Shadhinota Shorok” commemorating the historic significance of the road during Bangladesh’s Liberation War.

On trade issues, Masud Momen said the bilateral trade between the two countries crossed US$ 1 billion mark and there is scope for further expansion of trade addressing the barriers.

The Commerce Secretary-level talks will discuss ways to remove all kinds of barriers to higher trade volume between the two countries, he said, adding that the meeting will be an important one.

Masud Momen said the air bubble arrangements in the Covid situation have been extended between Bangladesh and India until 30 April or resumption of regular flights, whichever is earlier. “We saw its effectiveness.”

He said the two countries are in discussions to resume tourists and students visa soon, at least on a limited scale.

Responding to a question, the Foreign Secretary said Bangladesh requested early operationalisation of the Motor Vehicle Agreement under the framework of Bangladesh-India-Nepal (BIN) to start with as Bhutan is yet to complete their internal process.

Bangladesh also requested India to consider allowing the use of new land and rail routes and land ports via India for facilitating connectivity between Bangladesh and Nepal as well as Bangladesh and Bhutan.

Secretary (East) at the Ministry of Foreign Affairs Mashfee Binte Shams was also present at the briefing.

The Foreign Secretary-level talks between Bangladesh and India were held on Friday at the Hyderabad House in New Delhi.

The Indian delegation consists of representatives from the Ministries of External Affairs, Home Affairs, Commerce and Industry, Jal Shakti and Finance.