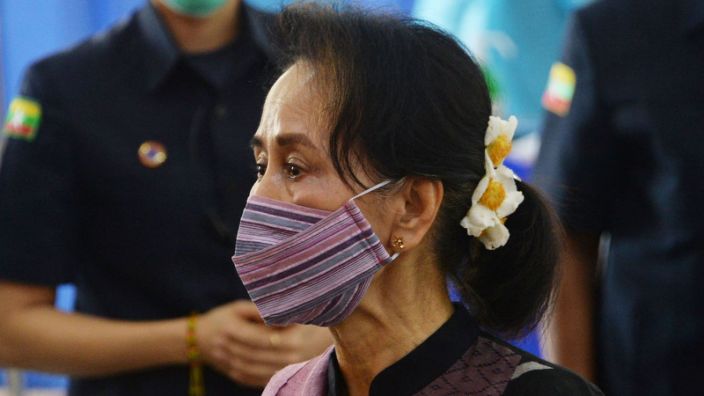 Online desk ; Myanmar leader Aung San Suu Kyi and other senior figures from the ruling party have been detained in an early morning raid, the spokesman for the governing National League for Democracy said on Monday, Reuters reports.

The move came after days of escalating tension between the civilian government and the powerful military that stirred fears of a coup in the aftermath of an election the army says was fraudulent.

Spokesman Myo Nyunt told Reuters by phone that Ms Suu Kyi, President Win Myint and other leaders had been “taken” in the early hours of the morning.

“With the situation we see happening now, we have to assume that the military is staging a coup,” he said.

“I want to tell our people not to respond rashly and I want them to act according to the law,” he said, adding he also expected to be detained.

A witness said soldiers had been deployed outside city hall in the main city of Yangon.

Mobile Internet data connections and some phone services were disrupted in Yangon on Monday, residents said.

State-run MRTV television said in a Facebook post that it was unable to broadcast due to technical issues.

A military spokesman did not answer phone calls seeking comment.

An NLD lawmaker, who asked not to be named for fear of retaliation, said another of those detained was Mr Han Thar Myint, a member of the party’s central executive committee.

Nobel Peace Prize winner Ms Suu Kyi, 75, came to power after a 2015 landslide election win that followed decades of house arrest in a struggle for democracy that turned her into an international icon.

Her international standing was damaged after hundreds of thousands of Rohingya fled army operations into refuge from Myanmar’s western Rakhine state in 2017, but she remains hugely popular at home.