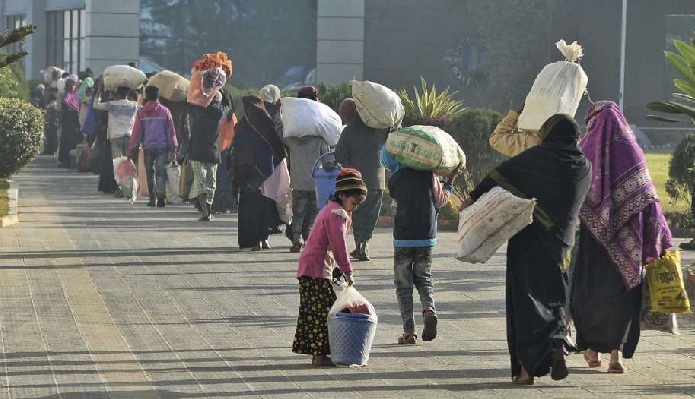 Around 740,000 Rohingya made the journey from Myanmar’s Rakhine state into the neighbouring country after operations in August 2017 that the United Nations had said could be genocide.

Suu Kyi was the country’s de facto leader at the time and defended the Myanmar military at an International Criminal Court hearing in 2019 into atrocities against the Rohingya, including rape and murder.

The news of Suu Kyi’s arrest spread quickly in the crowded refugee camps in Bangladesh where about one million Rohingya refugees now live.

“She is the reason behind all of our suffering. Why shouldn’t we celebrate?”, community leader Farid Ullah told AFP from Kutupalong – the world’s largest refugee settlement.

Mohammad Yusuf, a leader at the neighbouring Balukhali camp, said: “She was our last hope, but she ignored our plight and supported the genocide against the Rohingya.”

Some Rohingya held special prayers to welcome the ‘justice’ meted out to the Nobel peace prize winner, said Mirza Ghalib, a refugee at the Nayapara camp.

“If the camp authorities had allowed it, you would have seen thousands of Rohingya out on celebration marches,” he told AFP.

Maung Kyaw Min, the spokesman for the influential Rohingya Student Union, said that there was now increased hope that Rohingya might return to their villages in Myanmar.

“Unlike an elected government, this military government will need international support to sustain. So, we hope they will focus on the Rohingya issue to reduce international pressure,” he said.

Bangladesh authorities said that they were ‘monitoring’ the 270-kilometre border in case of a new influx of Rohingya refugees.

Dhaka issued a statement calling for ‘the democratic process’ to be upheld in Myanmar. While Bangladesh and Myanmar have made accords on repatriating refugees, none have gone back.

Bangladesh called on Myanmar to step up the repatriation process in ‘earnest.’