Refugees in Bangladesh to be repatriated: Myanmar army chief 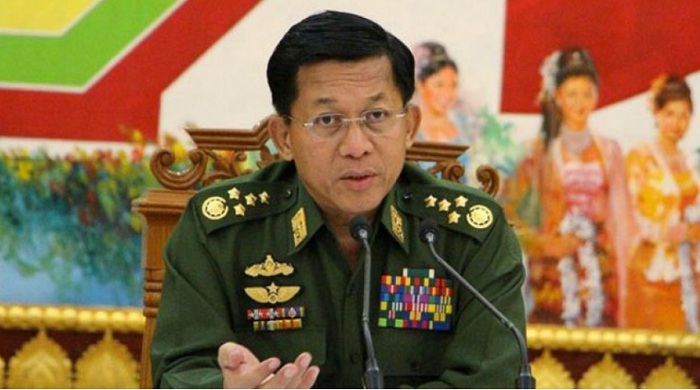 online desk ; Myanmar’s army chief General Min Aung Hlaing has promised to take back those who fled Myanmar and took refuge in Bangladesh.
He made the promise in his first televised speech since taking power through a coup.

The agreement on the Rohingya repatriation will not be affected, although the General did not mention the word “Rohingya” in his speech.

“Once the state of emergency is over, free and fair elections will be held as per the constitution and power will be handed over to the winning party in a democratic way,” he said.

Regarding the Rohingyas, he said, “The process of taking back those who went to Bangladesh in 2017 will continue. It will be implemented through negotiations with Bangladesh.”

However, he said, if it does not harm the interests of the country.

The military seized power last week, claiming without evidence that Myanmar’s national election was “rigged” and declared a state of emergency for a year. Civilian political leaders, including Aung San Suu Kyi, were detained.

The head of the military, Min Aung Hlaing, is now the most powerful man in the country.

Military authorities shut down the internet to quell anti-coup protests, however, hundreds of thousands of people took to the streets on Sunday.

After the army took power in this way, the general people of Myanmar did not sit still. The protest march in Yangon on Sunday was the largest in a decade.

Protesters are demanding the release of ousted and house-elected leader Aung San Suu Kyi and the restoration of democracy.