Socially-distanced Iran parades on wheels, not feet, to commemorate 1979 revolution 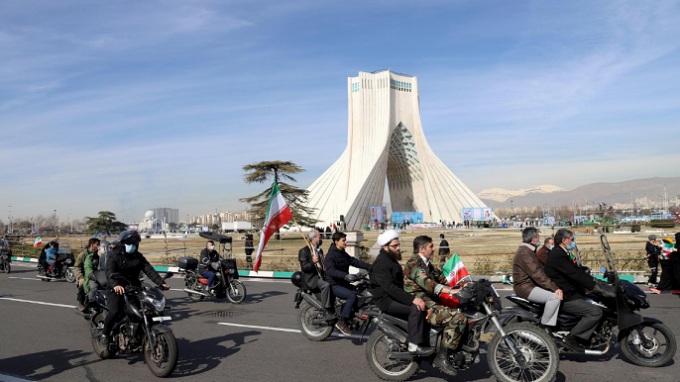 Online Desk : Iranians staged a socially-distanced commemoration of their 1979 Islamic revolution on Wednesday, parading in vehicles to avoid infection rather than on foot and displaying ballistic missiles in defiance of Western efforts to curtail the programme.

State television carried live footage of cars, motorcycles and bicycles moving through the streets of dozens of cities and towns where normally tens of thousands of people march at the annual event.

Despite the switch to wheel-bound forms of parade, the ceremony’s sentiments remained unchanged. Participants waved Iranian flags and signs that read “Death to America” and “Death to Israel” – trademark slogans of the revolution that toppled the US-backed Shah from his throne.

In an online speech, President Hassan Rouhani raised the prospect of diplomacy if there were reciprocal moves to break an impasse over its unravelling 2015 nuclear deal with big powers.

“The moment that they honour their commitments under the deal, we will adhere to our commitments… The only path is certainly the world’s agreement with Iran,” said Rouhani.

US President Joe Biden has said that if Tehran returned to strict compliance with the deal, Washington would follow suit and use that as a springboard to a broader agreement that might restrict Iran’s missile development and regional activities.

Ruling out talks over its military capabilities, Tehran insists that Washington should take the first step by lifting all sanctions reimposed on Iran after Biden’s predecessor Donald Trump abandoned the deal in 2018.

“Time is running out for Washington and the current window is closing fast,” state TV quoted Foreign Minister Mohammad Javad Zarif as saying.

Tehran faces Feb. 21 deadline when a new Iranian law obliges the government to scrap the sweeping inspection powers given to the UN nuclear watchdog by the deal and limiting inspections to declared nuclear sites only.

The US sanctions, coupled with the coronavirus crisis, have wrecked the economy in Iran, where official data in September showed that over 50% of Iranians were living below the poverty line.

State television showed three ballistic missiles on display in Tehran’s Azadi (Freedom) Square and said they had launch ranges of between 700 and 1,000 km (435-620 miles).

It also aired footage of underground missile bases that the elite Revolutionary Guards unveiled over the past few years.

Iran has insisted its nuclear programme is to generate power and for other peaceful purposes. But US intelligence agencies and the United Nations nuclear watchdog believe Iran once had a nuclear weapons programme that it halted.