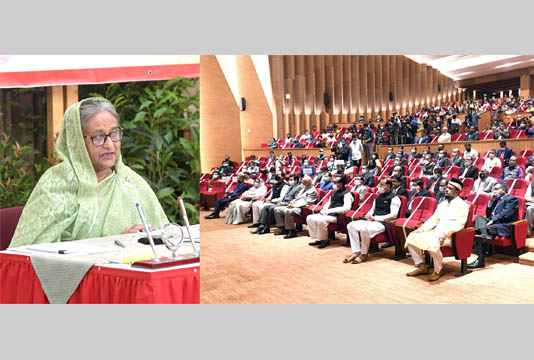 Online Desk : Prime Minister Sheikh Hasina on Thursday said that she has released Taka 1000 crore to construct 50,000 more houses for the homeless and landless people.

“Marking the Mujib Borsho, today, I released Taka 1,000 crore for constructing 50,000 more houses for the homeless and landless people. We are constructing one lakh more homes for them,” she said.

The prime minister was speaking at the oath-taking ceremony of the newly-elected Mayor of Chattogram City Corporation (CCC) Rezaul Karim Chowdhury and 55 ward councilors, including 14 councilors in reserved seats at Osmani Memorial Auditorium , joining virtually from her official Ganabhaban residence in the capital.

“Our target in the Mujib Borsho is that none will remain homeless and landless in Bangladesh,” she said.

Extending heartiest greetings to the newly elected mayor and councilors of Chittogram City Corporation, she called upon the public representatives to make their all out efforts in serving the people and building the nation.

She also asked all public representatives including lawmakers, upazila chairmen, municipality mayors and councilors, union parishad chairmen and members to take measures to motivate the people of their localities about taking the Covid-19 vaccine.

“I urge all the public representatives to make sure that the people of your localities can receive vaccines in due time. Motivate them in receiving the vaccine,” she said.

The Prime Minister asked the public representatives to make sure that the advancement of the country continues in future and to oversee the measures taken by her government for ensuring the overall socio-economic development of the country so that those could be completed in the quickest possible time.

Sheikh Hasina, also president of the ruling Awami League, called upon the newly elected mayor and councilors of the Chattogram City Corporation to work for the people’s welfare keeping in mind the pre-election pledges and the oath they are taking.

In this connection, the Prime Minister said, “If you can earn the trust and confidence of the people, you will win time and again. I firmly believe that nothing else is required for this.”

She added: “We have been implementing huge programmes for the overall development of Bangladesh. We want quick implementation of those without any lapse.”

“Being a public representative, you have to supervise the development schemes so that those can complete quickly and properly for the sake of people’s welfare,” she said.

The Prime Minister mentioned that the people who captured the power illegally after assassination of Father of the Nation Bangabandhy Sheikh Mujibur Rahman on August 15, 1975, had enjoyed the power for making their own fortunes and did nothing for the people.

On the contrary, she said, “To me power is to serve the people and to work for their welfare and change their lot which Bangabandhu had dreamt of.”

The Prime Minister said her government has been working tirelessly for the advancement of Bangladesh towards development and prosperity free from hunger and poverty envisioned by the Father of the Nation.

Sheikh Hasina, also elder daughter of Bangabandhu, said that the country’s poverty rate has decreased, the per capita income has increased while the GDP growth has reached over 8 percent due to the relentless efforts made by her government.

She said that her government has been implementing perspective plan 2021-2041 and Delta Plan-2100 to put Bangladesh in a dignified position on the global stage.

Describing Chattogram as important for the country, she said that Chattagram has also witnessed huge development compared to that of pre-2009 period while more development works are being carried out in the port city.

“We are not only working for the development of Chattogram, but also for the entire country. The support from the people is the most important thing to pursue. By the grace of Allah, we are getting the support,” she said.

But, the entire world including Bangladesh has been stalled due to the Coronavirus pandemic, she said, adding that her government has somehow managed to bring the situation under control with various timely measures including announcement of stimulus packages to keep running the country’s economy and ease people’s sufferings.

The premier said that even her government has allocated Taka 1000 crore for purchasing the Covid-19 vaccine when researches were going on to develop it in different countries of the globe and contacted every country which is working on it to get a vaccine first once it is ready for immunization.

She called upon all the public representatives to motivate the people of their localities in receiving the vaccine.

The Prime Minister said the registration process has already been made easier and one can register his or her name after going to digital centres across the country.

She requested the countrymen to follow the health guidelines that included wearing facemasks and washing hands properly even after receiving a vaccine to make sure protection of all from the pandemic.