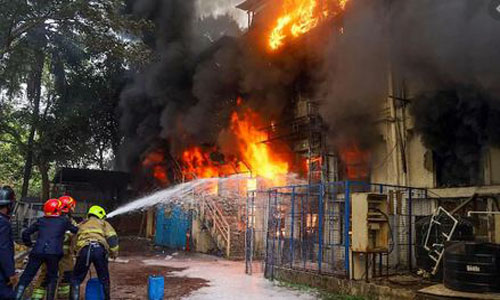 Online Desk : An explosion at a firecracker factory Sattur district in India’s Tamil Nadu on Friday that left at least 11 people dead and several others injured.

The incident took place while the staff of the Virudhunagar- based private firecracker factory was mixing some chemicals to produce fireworks, reports India Today.

Soon after the explosion, 10 fire tenders were rushed to the spot but, as per sources, they were having a difficult time due to chemicals at the site.

Initial investigation suggests that the factory was not following the safety rules strictly, which could have led to the fire. Further investigation is underway.

Prime Minister Narendra Modi has expressed his grief over the incident and has announced an ex-gratia of Rs 2 lakh for the kin of the deceased from the Prime Minister’s National Relief Fund (PMNRF). Rs 50,000 will be given to those injured in the incident, the PM said.

“Fire at a firecracker factory in Virudhunagar, Tamil Nadu is saddening. In this hour of grief, my thoughts are with the bereaved families. I hope those injured recover soon. Authorities are working on the ground to assist those affected,” PM Modi said in a tweet.

“An ex-gratia of Rs. 2 lakh each has been approved from PMNRF for the next of kin of those who have lost their lives due to a fire in Virudhunagar, Tamil Nadu. Rs. 50,000 would be given to those seriously injured,” he said.