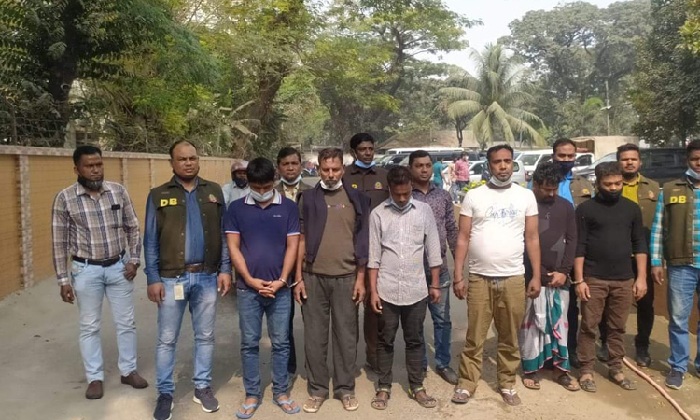 Online Desk : Detectives have arrested six mugging suspects on charges of snatching Tk 35 lakh from a businessman after stabbing him a week ago in the capital’s Bangabazar area.
The six were arrested from Dhaka and adjacent districts during several raids on Thursday and Friday, said the Detective Branch of Dhaka Metropolitan Police (DMP) additional police commissioner AKM Hafiz Akhter at a press briefing at the DMP Media Centre in Dhaka on Saturday.

At the briefing, AKM Hafiz Akhter said that the arrested were members of an organised gang of muggers.

The police and detective started investigating the case.

Analysing CCTV footages of the area, the police identified the muggers.

Hafiz said that 8 to 10 muggers took part in the snatching. They attacked and stabbed travel agency businessman Shahidul Islam while he was going from Tantibazar area with Tk 35 lakh in a bag to deposit the money to a bank.

Shahidul was on a rickshaw when the muggers waylaid him.

They slapped and punched him. Later, the miscreants stabbed at his beneath his right eye leaving the businessman critically injured and left with the amount, said the DB officer.

The businessman was taken to Dhaka Medical College Hospital.

A case was filed with Shahbagh Police Station on February 8 over the incident. Receiving the case, the detectives launched raids identifying the culprits examining the CCTV footage. The DB knows who were involved in the incident and who ordered the muggers to commit the crime. They will be arrested soon.

Replying to a question, AKM Hafiz Akhter said the muggers shared the money among themselves. “We’re hopeful of recovering the money once we will be able to arrest all the culprits.”

Asked about the number of muggers, the DB’s additional police commissioner said, “The gang is much bigger in size. We don’t want to disclose their number for the sake of investigation.”