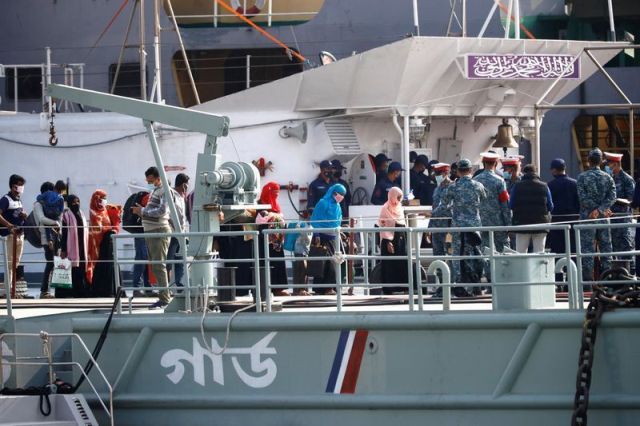 Online Desk : The latest batch of Rohingyas has reached Noakhali’s Bhasan Char. Five ships of the Bangladesh Navy carrying 2,010 Rohingyas left the Patenga Naval jetty around 10:15am on Monday.
Bhasan Char Police Station’s Officer-in-Charge Mahe Alam said the Rohingyas were briefed after they had gotten off the ships. They were then transferred to Bhasan Char cluster.

Sources at Refugee, Relief and Rehabilitation Commissioner office said 6,688 Rohingyas have so far been shifted to Bhasan Char from Cox’s Bazar camp in three phases.

In the fourth batch, some 4,000 Rohingyas will be shifted to Bhashan Char.

Where is Bhasan Char?

Located 34 kilometres off the mainland, the island surfaced 20 years ago and was never inhabited.

Contractors say its infrastructure is like a modern township, with multifamily concrete homes, schools, playgrounds and roads. It also has solar-power facilities, a water supply system and cyclone shelters. The island has all the modern amenities and a police station has been set up there recently.

Bangladesh spent millions of dollars to develop Bhasan Char and plans to relocate 100,000 Rohingyas there in phases in the face of growing concerns over the extreme congestion in Cox’s Bazar camps and to avert any risk of death due to landslides and other unwarranted incidents.

Who are the Rohingyas?

The Rohingyas are one of the most persecuted minorities in the world.

Members of the mainly Muslim majority ethnic minority are denied citizenship by Myanmar and many are forced to live in squalid camps in apartheid-like condition. State-sponsored discrimination against the Rohingyas stretches decades back.

Bangladesh, one of the most densely populated countries in the world, is currently hosting more than 1.1 million Rohingyas. The majority of them came here in August 2017, fleeing persecution in their homeland of Rakhine State in Myanmar.

Bangladesh has long been urging the global community to take effective steps to put pressure on Myanmar to create a congenial atmosphere for Rohingya repatriation but there has been little progress so far.

The presence of the huge number of Rohingyas in the coastal district has put them on a collision course with the locals. Many Rohingyas have got involved in various criminal activities.